I’ve come to enjoy Bethany Heck’s Eephus League site since she was featured on Uni Watch a few weeks ago (and not just because she gave me a nice plug). There’s a lot of cool stuff there, so it’s worth a look around.

I learned something in an interesting post on Monday: The Mets’ ballpark is the only one of the 30 in MLB without yellow foul poles. Orange is always better, of course, but it’s nice to know that the pleasing aesthetics also make the ballpark unique among its 30 peers. (Can ballparks have peers?)

Anyway, the visual evidence I didn’t know I had: 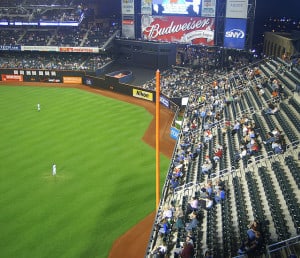