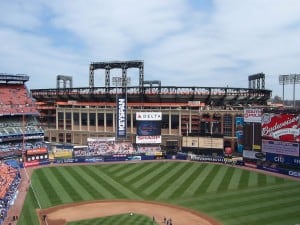 The Mets are celebrating 45 seasons at Shea Stadium this summer before they open the sparkling new Citi Field in 2009, and as the new ballpark takes its final shape behind the giant scoreboard in right-center field, it’s hard not to long for the future. Yet it becomes easier if you dwell even briefly on the present play by the Amazin’s. Amazin’ly frustrating is what it is.

Was so sluggish this morning. The sniffles I went to bed with stuck around till morning and invited a sore throat over as well. Such uninvited guests. It didn’t help that Harry made his way into the bedroom and kept me awake several times with purring and attempts to burrow under 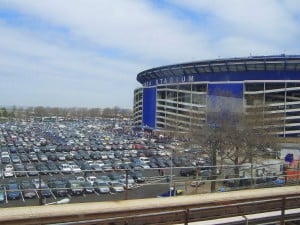 the covers. Perhaps I can’t close the door tightly enough because, subconsiously, I want the cats to join us. But it’s definitely not a good idea when I need to get a good night’s sleep — or a good five hours.

It also doesn’t help that the train is eight minutes late. Though while writing, I forgot about my sniffles for a while, so hopefully the rest of the day follows suit. (Postscript: It does. I don’t become aware of my minor ailments again until I’m sitting at my desk more than 12 hours later.)
A lot of good things about this Opening Day — particularly fewer black jerseys and hats in the stands. One guy in front of me actually went back to the souvenir stand to exchange a black ski cap he bought for an orange one. And I detected a significant lack of red in the ballpark, too. Sure, the Phillies fans were there, and if you were near them, they made their obnoxiousness heard, but I actually felt that there were fewer this year than last. Philly fans are weird that way: They tended to remain underground (unless you’re at Wogie’s) through most of last baseball season, then when their team went on a run in September — and only then — did they come out of the woodwork, dusting off their red caps (or purchasing them, from the looks of many a pristine hat I saw) and walking around New York with a newfound air of confidence.

My mom’s first words to me this morning when we met at Penn Station were about the obnoxious Phillies fan standing near the women’s room waiting for his girlfriend — and passing the time by verbally chastising any Mets fan who passed by. We saw more as we entered Shea Stadium, and more when we left, but we certainly saw some civil, respectful ones as well (a few) and more than enough obnoxious Mets fans. The thing about Mets fans, though, is that they’re obnoxious even when you agree with them. I’m the kind of fan who sits and stews quietly when his team struggles. I don’t want to be bothered, and I’m not one for talking in those situations. Most of the people in my section, though, vented their frustrations by berating the relief corps.

And as for the in-stadium relations between Phillies backers and Mets supporters: I saw more fights in the stands at this home opener than at any single baseball game I can recall. The scuffles we saw broken up across all sections of the ballpark numbered at least five, and on three of them, I still saw punches being thrown (no matter how far off the incident was) before the security swarm could reach the pugilists. One fight originated in the orange field boxes, just a few rows from the Phillies dugout. And in each instance, if we looked long enough to see who was being led away — often with a struggle and lunges back toward the sparring partner — we saw one perpetrator whose wardrobe contained at least a little red and another who had a hint or orange, whether it was among blue and white or as an accent on a black top.

I’m not going to rehash the game, though. It’s here in perpetuity if I ever feel the need to go back beyond the box score. The indelible images from this Opening Day — my 10th in a row — were the approach on the 7 train and the new descent from the station to what used to be the road below the walkway that took you to the circular stairways that provided the narrow glimpse into the ballpark. That bridge has been demolished to make way for the expanding Citi Field.

And that’s what stands out the most: Citi Field is a budding ballpark now, not just a few acres of concrete and steel. It stands as a picturesque panorama as you emerge from the 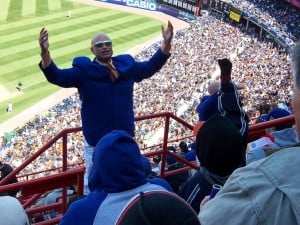 subway station and a majestic backdrop to the ballgame once you settle into your seat inside Shea. It’s going to be one of baseball’s better ballparks, even if it’s still out in one of the far corners of New York’s outer boroughs.

The last moment of levity on an afternoon that went from excitement, elation and joy to frustration, anger and disappointment came in the eighth inning with the sing-along vote. The Shea Stadium crew acknowledged the Rick Astley vote and played “Never Gonna Give You Up” — and the fans promptly booed it down. How much of the jeering was actually a carryover from the Mets’ bullpen effort, however, has yet to be determined.