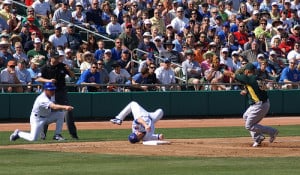 The vacation got off to a glorious start. Our flight arrived in Phoenix half an hour early and we got our rental car and headed over to HoHoKam Park in Mesa (with a pit stop at In-n-Out Burger in Tempe).

Moments after Randy Wells made the first pitch of the spring for the Cubs, it hit me and I turned to Casey and said, “We’re at a ballgame!” Baseball is back. Thank God.

It was a great day for the Cubs, which made for a wonderful afternoon. We spent the first four innings in our seats on the first-base side, then got up to grab a beer, roam the ballpark and take in the atmosphere.

Upon reaching the left-field corner, Casey’s eyes lit up at a sign advertising a group of former players signing autographs. “Rollie Fingers!” she said. “I have to see that mustache in person!”

Rollie was there, sitting next to fellow Hall of Famer Ferguson Jenkins. Joining them beneath the tent were Bert Campaneris, George Foster, Lee Smith and Pete LaCock. For a $30 donation — as it was called — I bought an autographed postcard of Jenkins’ Hall of Fame plaque and an 8×10 color glossy photo of Fingers delivering a pitch in Oakland’s glorious yellow jerseys of the ’70s.

Sadly, this game is the only baseball stop on our Arizona/Utah vacation. From here, it’s north to higher elevations and colder climes, to the desert and the national parks. I may have another update or two over the next week, but if not, this will have to stand for the time being.

« Jeter rules Jersey
And we’re back »