I finally found some 2012 Topps cards at a local Target, and even though I was going to boycott them this year for putting Jose Reyes in a Marlins uniform when he hasn’t even played a game for them, I couldn’t help myself. I bought one of the Target-exclusive 10-pack (eight cards each) boxes and an additional five single packs holding 12 cards each.

First off, the exclusive commemorative patch card in the box was one of the weak “Historical Stitches” meant to resemble the ID stitching sewn onto the jerseys back in the day. I got Bob Gibson, which if it were a patch of his number, I might be more excited about it. But his name? Meh. So that card, along with several others I pulled, I’ve put up on eBay in team-sorted lots of varying sizes. I’m not expecting too many hits, but figured it was worth a shot. The only ones I knew I definitely wanted to keep were any Mets and a few other players I like. I also have an affinity for the stars who helped me win my fantasy league last year, so I put those aside.

Now, for the Mets. Out of 140 cards, I drew five Mets, which seems like a solid ratio compared to past years, but it’s certainly possible that I’m not remembering it accurately. A better ratio? I went 5-for-5 in not drawing black jerseys. Even better: two pinstriped uniforms, two white with blue hats/helmets, and one road uniform.

Here are the five, from least desirable to most (in my mind), with a few thoughts on each: 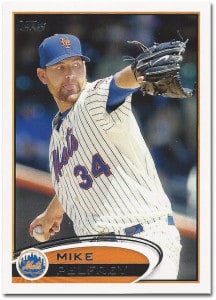 Not many people want Mike Pelfrey on the Mets, let alone his baseball card. But it’s a beautiful sunny day in the pinstripes, so there’s no better look in Queens. And he looks like a cat sticking out its tongue. Here’s hoping for a rebound season. 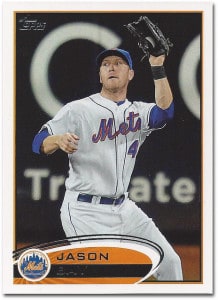 After two years of underachieving, hopefully this is the year Jason Bay comes close to producing for what he’s paid. Right? RIGHT?! The closer fences should only help. He just has to stay healthy. I saw the guy hit a grand slam last season, so hopefully that’s a sign. 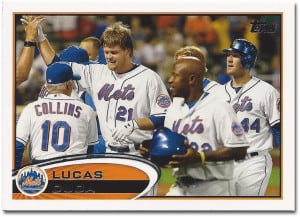 I was torn as to whether this or the next card is my second-favorite, but you’ll see why the next one won out. I like Lucas Duda as a promising power source this year, plus the horizontal orientation is nice. And I’m 99.9 percent certain that the photo was taken after his walk-off single against the Padres on Aug. 8 last season. In fact, I believe it’s this moment at the 48-second mark: The high-five matches up; Willie Harris is furthest from the TV camera and closest to the first-base photo pit; Terry Collins has come out for a handshake; and Ken Oberkfell is the big head behind Duda’s in the video still and his jersey is to the left of Collins’ head. 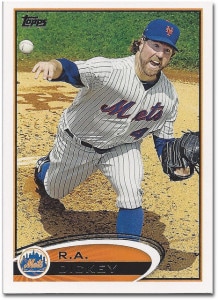 The reason R.A. Dickey is No. 2 should be obvious: Dickey Face! I’ve also seen it in person in Baltimore, but how can you beat a sunny day in the pinstripes? Plus, it’s a great vantage point, probably taken from a concourse with a super telephoto lens. I’ve seen some of the pros shooting up there several times. 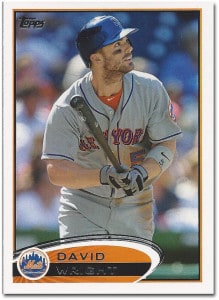 And the top Mets card I pulled is none other than David Wright‘s. This is the first standard base card of Wright that I’ve drawn in some time. I think any recent ones I have I bought on eBay.

Wanna guess which team showed up the most on cards I pulled? Yeah, the Yankees — nine of them, including two Jesus Montero cards, one of which was the Target-exclusive red-border variation. I also got Derek Jeter‘s base card and a couple of subsets that forced Babe Ruth and Mickey Mantle into the set. And CC Sabathia came in the form of the 1987 Topps mini homage, the only time you’re likely to hear “mini” when relating to Sabathia. (The other two ’87 minis I got were David Price — one of the stalwarts of the pitching staff of my Doherty Silk Sox championship team — and Buster Posey.)

I’m toying with the idea of buying more — perhaps a hobby box online — to see what else comes up, but I’m going to give myself the weekend to mull it over. Of course, it would all be worth it if I drew one of the short prints that are fetching $30 and up on eBay. I have no need for fake a Reyes or Pujols card or a squirrel.

« Braves history, give or take 90 years
One last season for the B-Mets? »