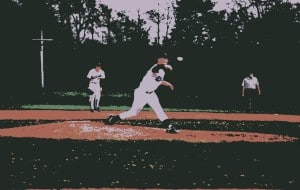 Photo is mine; funky effects with the help of Piknik

Yesterday’s New York Times had a splendid article about the old friend — that “speedball” pitcher — who appears in the opening of Bruce Springsteen’s “Glory Days.” It’s exactly as it sounds — Bruce was walking into a bar — the Headliner in Neptune — as the old teammate, Joe DePugh, was walking out. They recognized one another and headed inside to catch up over drinks. That the lyrics are so true to the story, that the old creed, “When the legend becomes fact, print the legend,” doesn’t even apply; the legend is fact, no embellishment needed.

It’s a great story dug up by Kevin Coyne, himself from Freehold at the same time as Springsteen — and those connections and relationships are what allowed him to put the pieces together and talk to those who knew, particularly DePugh himself. I’ve always enjoyed Coyne’s writing and ability to tell a story, but I’m a little biased — he “embedded” himself in the student body at Notre Dame shortly before I went there, and the resulting book came out during my sophomore year. He’s also written about black baseball in New Jersey in general and Atlantic City in particular, the still-in-limbo Bergen CliffHawks, veteran baseball reporter Ed Lucas, the lack of space for baseball in Jersey City and a brief essay on summer among his baseball — and my favorite — pieces. Add this one to the list.

I had a friend was a big baseball player
back in high school
He could throw that speedball by you
Make you look like a fool boy
Saw him the other night at this roadside bar
I was walking in, he was walking out
We went back inside sat down had a few drinks
but all he kept talking about was