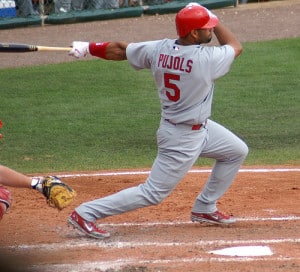 There has been a lot of talk lately about the highest-paid players in the game, from the Albert Pujols talks to the history of the game’s most-compensated stars through the years. And then Devon Young over at Seamheads compared those milestone contracts to what players make today, an illuminating look at player compensation vs. inflation.

A couple of weeks ago, I came across a unique proposal for paying players — in 1894. It’s another gem from Low and Inside, the book of baseball anecdotes published in 1949 that described a plan to build a ballfield atop Grand Central Terminal in 1912.

A friend of the workingman (baseball-playing division) made a profound proposal back in 1894 in an essay written for the Detroit Journal, under which ballplayers would no longer have to suffer under an economic system by which they got regular pay. The Detroit thinker recommended that they be paid on a piecework basis.

He was inspired by the fact that in a single day of that 1894 season three Western League teams produced an over-all total of one hundred and nine runs.

“It is not fair,” said the essayist, “to work men as hard as the players did that day. It would be more desirable all around if the men were paid by what they do rather than so much a week or a month.”

He then proposed the following piecework scale:

He did not make it quite clear just how much a home-run hitter would get — presumably forty cents for the homer and another fifty cents for scoring. Errors, he suggested, would be charged against the player on a sliding scale, and there would be a special scale for pitchers.

I was curious as to how this pay scale would work with today’s players, in today’s dollars. Of course, there are a few gaping holes: no RBIs, no indication of what the sliding scale for errors might be, and no idea what the pitchers’ scale might be. So for the sake of argument, let’s assign an 1894 value of 25 cents to runs batted in. I’m going to ignore the penalty for errors, because that’s a lot more work than I’m willing to do at the moment. If anyone has a suggestion, feel free to comment. And we’ll leave pitchers out of it for now, too.

You might be able to see where there’s going to be a problem already — putouts are going to skew the results toward certain positions. After plugging last year’s stats into a spreadsheet with formulas converting the stats into these dollar amounts, the game’s best player earned the most money, but not nearly as much as his 2010 contract paid him. Pujols, who made nearly $14.6 million last year, would have been the highest-paid player under this system — with a salary of $22,474.85. Second on the list is Adrian Gonzalez ($19,900.60) and third is Oakland first baseman Daric Barton ($19,765.15). First basemen held the first 19 spots and 22 of the top 23 as catchers (who get putout credit on strikeouts) start creeping onto the list.

It’s not really worth exploring the numbers any further. Clearly that 1894 model wouldn’t work today, and not just because of how the game’s pay structure has left inflation in the dust. For one thing, I can’t imagine there’s anyone who values putouts by a fielder as much as home runs by a hitter (outs recorded by a pitcher, however, may be the starting point for developing a pitchers’ pay scale).

And of course, ballplayers in 1894 weren’t seen as the superstar celebrities they are today. They were certainly held in high esteem, but more as active, sporting men than athletic royalty. It was a nice try, Detroit Journal essayist, but it just won’t work.