Some fans and beat writers are looking at this road trip to Atlanta and Philadelphia as a make-or-break stretch of six games in the Mets’ season.

But I think it’s already broken.

This isn’t just about yesterday’s debacle against the D-backs, which, had things been a bit different (say, New York had won five out of six from Arizona, with yesterday being the one loss), might otherwise be looked at as just a learning experience for Jon Niese. The young lefty still threw 51 of 83 pitches for strikes and should soon learn how to get a left-hander out even after two straight hits. Mets Police and Metsgrrl (not to mention a kick-ass headline on the game recap) have summed up pretty well how I felt sitting out there in Queens yesterday. I’m sure there are plenty of other good summations, but I can’t bring myself to read anymore.

But yesterday’s events confirmed for me what might be the core problems of this team.

I’m not part of the camp that thinks a roster overhaul is in order, that trading David Wright or Jose Reyes or Carlos Beltran is what is needed to get things going in the right direction. Those guys — particularly Wright and Reyes — are the core and that’s who they need to build around to get back on top of the NL East. And I’m glad they stood their ground at the trading deadline, not making a move for the sake of making a move (which it sounds like this one guy behind me yesterday wanted to see). Dealing a few mid-level prospects for a Jake Westbrook or Ted Lilly or Chad Qualls wasn’t going to make up four or five games in the standings. Besides, it sounds like whoever the Mets contacted to sniff out a trade was asking for Niese or Ike Davis — or both — as a starting point. No, thank you.

And I’m not sure the Mets had too many tradeable veterans to send away to bring back a young player or two. Pedro Feliciano was probably the most attractive candidate, and maybe he could have been moved, but relief pitching is at a premium, and if this team is a few offseason moves away from fielding a legitimate contender, Feliciano is going to be part of that foundation. Francisco Rodriguez is probably untradeable (and, I’m sorry, for all his faults, he’s not really any worse than most other closers. Overpaid? Sure, as are pretty much all ninth-inning guys not named Rivera). Jeff Francoeur? He can be dealt in August — and he just might be, once we all get a look at the standings on Sunday night.

So I’m fine with the lack of activity at the deadline, because these three key problems aren’t solvable in a July trade or two.

1.) Three particularly bad contracts are holding Omar Minaya and Jerry Manuel hostage. That is, they don’t have the flexibility to improve the roster with the three-headed albatross of Oliver Perez, Luis Castillo and Alex Cora. Ollie and Castillo are untradeable, unless the Mets get another bad contract back in return. And for the money they’re making — at least that Perez is — it’s hard to designate them for assignment and eat that money, whether or not you believe the team is in financial straits because of the Madoff mess. Still, no one who was at the ballpark yesterday would care if they heard tonight that one or both was booted off the roster. And Cora, as a versatile backup infielder (even if he can’t hit), isn’t a bad contract for one year, but when he’s starting 41 of the 61 games he’s appeared in (numbers that should, at the very least, be reversed) and when he has a terrible vesting option that becomes guaranteed as soon as he plays in that 80th or 81st game, then it’s a bad contract, because then you’re stuck with a .200 hitter again next season.

The one tarnished silver lining I can find in these deals is that Omar stood his ground when Bengie Molina wouldn’t take the Mets’ one-year offer. (Though Cora’s deal was also done this offseason, which doesn’t help matters.)

2.) The faith in John Maine in the rotation — and, relatedly, Perez, too — helped sink the Mets this season. I don’t think there was any question as to whether Maine would make the rotation this spring, or that he would be the No. 2 starter. Maine’s ceiling may have once been as a No. 2, but he had done nothing since 2007 to show that potential. Going into spring training with Maine and Perez as the Nos. 2 and 3 didn’t help. A contending team needs those slots to be rock-solid firm, not based on potential and hope for a bounce-back season. Mike Pelfrey and Niese certainly pitched like consistent top-of-the-rotation starters in the first half, but if Pelfrey doesn’t get over this dead-arm period (or whatever it is) and Niese doesn’t rebound from Sunday, the Mets can’t go into 2011 with those two as the rock-solid Nos. 2 and 3.

This has been discussed elsewhere this season, but the Mets are pretty lucky that they didn’t overpay (in dollars or years) for some of the free-agent pitchers that we were all clamoring for in the offseason, myself included. Jason Marquis hasn’t pitched for the Nationals since April, I think; Ben Sheets is done for the year; and John Lackey would have been way too many dollars for certainly too many years. Joel Pineiro (10-7, 4.18 for the Angels) and Jon Garland (10-7, 3.60 for the Padres) would have helped keep Hisanori Takahashi in the bullpen, but would either have really made that much of a difference? (Both might have, but then Niese would be something like 12-2 for Buffalo right now.) Which brings us to my third key problem that has soured 2010 …

3.) Why can’t this team win on the road? At 20-33, the Mets are playing .377 ball on the road. Want to know who has better winning percentages away from their home parks? Toronto, Kansas City, Cleveland, Oakland, Milwaukee, the Cubs, Houston, Houston, Colorado and the Dodgers. The Mets are playing .635 baseball at home, better than everyone but the Braves, Phillies, Yankees, Cardinals and Rockies. If the Mets could play just close to .500 on the road (I’m talking 26-27 at this point, if they’d won six more games — how about three in Arizona, one in Puerto Rico, and one each in San Francisco and Los Angeles), they’d be a half-game out of first as they begin a three-game set at Turner Field.

With such a difference in home and road winning percentage (at a .257 difference, the only teams with bigger gaps are the Tigers, .346; Braves, .285; Cardinals, .275; and Rockies, .276; and Atlanta leads baseball with a .723 winning percentage at home!) I don’t know how that can be explained by anything other than the manager and coaching staff. As explained in Nos. 1 and 2, Manuel is a bit hamstrung because of some of the players on his roster, but if they can win 63 percent of their games at home, they shouldn’t be losing 63 percent on the road. As much as I love Howard Johnson, he has to shoulder some of the blame when the team is shut out three times on the same road trip for the first time since the early ’90s, or whenever it was. And then they added a fourth shutout for good measure. And Manuel, who I gave credit to when he had the team in first place back at the end of April and within half a game as late as June 27, has to do something to get this club a winning road trip. His refusal to use K-Rod for anything but a save situation in a tie game on the road is maddening. What’s the point of keeping Rodriguez for a save situation that only might appear when Ryota Igarashi or Raul Valdes is taking the loss in the bottom of the ninth or 10th? 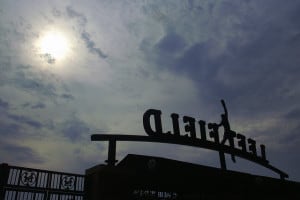 And so that’s how I see it. Others may not agree, but for some reason I like to find two or three points that seem to be the root cause of the problem. I guess it’s something of a baseball butterfly effect — had things been different in these particular instances, then maybe, just maybe, everything would have turned out better in the end (or to this point).

As for this road trip, I can’t see how anyone thinks this time will be any better than the last one. It’s now August. There are two months left in the season, 29 home games and 28 road games (if I counted and subtracted correctly in my head). If the Mets play at their current rates at home and on the road, they’d go 51-30 at Citi and 30-51 on the road. Yes, folks, that’s a .500 season. Except, for this road trip to “make” them, they need to do no worse than 4-2. There’s not enough time left to break even in six games in Atlanta and Philly, not when there is another trip to each one still to come. They have to make close ground, winning two out of three at each stop this week. They can’t afford any steps back.

And I don’t think they can do it. The sun may not have set on this season, but it’s casting some very long shadows.

My one final thought to wrap up this discourse is this: After the heartbreak of 2007 and ’08 and the frustration of nothing going right in 2009, I just wanted a competent, competitive team. I let myself get excited over first place at the end of April and half a game out five weeks ago. I enjoy it when my teams are winning and I can’t stand to criticize and nitpick their faults. I know someone who gets worked up over every at-bat, nearly every pitch. I just can’t be a fan like that. I just wanted a team that had a chance to finish a strong second in the division, to look down on the Braves or Phillies, even if it meant the other one was on top and some team from the West was the Wild Card winner.

So much for that. Guess I’ll have to look for some room on that Reds bandwagon. It’d be nice to see some fresh blood make some noise in October.

Created with Admarket’s flickrSLiDR.
« Linkage: Mets at the Polo Grounds
Cost per win through Aug. 2 »