Late last night, Marty Noble put up a blog post reminiscing about crooner Johnny Maestro and hurler Doc Gooden, and it brought up some memories of my own that I didn’t include in my post about Gooden’s Nike billboard in Midtown.

I was 10 in 1986, and the two games I did see that year were started by Sid Fernandez (8-2 on June 20!) and Rick Aguilera (he homered!). I didn’t catch Gooden until he faced the Phillies on Opening Day 1991, my first opener and definitely a thrilling one because my parents let me miss school to go. Sometime during that offseason, I asked (probably begged) my parents to buy tickets and call me in sick to school. They agreed — “Just this once” — and Dad took the bullet by calling out sick himself and driving my friend Will (he might’ve actually been off on his Catholic high school’s two-week Easter break, but his parents would’ve let him go anyway) and me to Queens. It truly would’ve pained my dad to take the day off and make the two-hour drive from the Jersey Shore, across Staten Island, up the BQE and down Northern Boulevard (before the internet and GPS, he took the most direct route, rather than the fastest, which is the BQE to the Grand Central Parkway). He’s a Mets fan, but he prefers to watch on TV; Will’s a Yankees fan, but he’s not the dick kind that starts chanting “Let’s go Yankees!” on Opening Day in Queens.

Traffic near Shea was a mess, and the parking lot where Citi Field now stands was full by the time we arrived. So we wouldn’t miss the first pitch, Will and I got out of the car and walked across the lot and reached our seats in the left-field mezzanine with time to spare. Dad had to park somewhere in or near Flushing Meadows Park and caught up to us in the second inning, I believe. By then, the Mets were already ahead, 1-0, after Vince Coleman doubled down the right-field line in his first Mets at-bat and Gregg Jefferies followed with a double down the left-field line.

Gooden was on his game that day, getting through the first needing only 13 pitches to get Lenny Dykstra to fly out and fanning Darren Daulton and Von Hayes on seven total pitches. Doc went eight innings, allowing six hits and a walk and striking out seven. His only mistake was a 1-2 pitch to John Kruk leading off the fifth. Kruk belted a line-drive homer over the Mets bullpen in right field and hit one of the Phillies’ buses parked beyond the ‘pen.

The other game was on July 8, 2000, the Shea Stadium end of the first day-night Mets-Yankees doubleheader in both boroughs. Doc won that one, too — for the Yankees, in his former home. I’m pretty sure that remains the loudest ovation given a Yankee in Queens since interleague play began, and the only time Mets and Yankees fans cheered in unison. That included myself and a college pal, Brad, another Yankees fan (he grew up in the Bronx suburb of Fort Wayne, Indiana). The game was Doc’s first in his second stint with the Yankees, following his release by the Devil Rays, and it was his final victory at Shea. He won only three more games in his career.

So Gooden’s combined stat line in the two games I saw him pitch reads like this:

He only struck out one Met that day, and his performace was overshadowed by the night game — also a 4-2 Yankees win — in which Roger Clemens beaned Mike Piazza, giving him a concussion and keeping him out of that year’s All-Star Game.

It was clear from the beginning of the day game that the former Mets would do in the current Mets. Chuck Knoblauch led off the game by lining the first pitch to center for a hit, but Jay Payton threw him out at second base. After Yankees first-base coach Lee Mazzilli appealed to first-base umpire Robb Cook that first baseman Todd Zeile had interfered with Knoblauch, the call was overturned. Bobby Valentine argued and was objected, even though he was right — the call was crap. Zeile barely moved from his position in the field, and Knoblauch took an unusually wide turn around first base. Valentine argued that Knoblauch never changed direction or came into contact with Zeile, but the blind umps wouldn’t budge. I distinctly remember Valentine repeatedly and demonstratively walking in Knoblauch’s footsteps on the otherwise pristine, freshly dragged infield to make his point. It’s still a bullshit call. Knoblauch should’ve been out and Derek Jeter, who followed with an RBI double, should have one fewer RBI among his career totals.

There is one more memory of seeing Gooden in person, though he didn’t pitch. Dad also took Will and me to the final weekend home game in 1989. The Expos won, 6-5, on Fan Appreciation Day (remember those?). Howard Johnson stole his 40th base and Darryl Strawberry hit his 29th home run. But the highlight came before the game, when Will and I were hanging over the railing at the end of the right-field loge, watching David Cone warm up for the start in the Mets bullpen. At one point, Gooden emerged from the small clubhouse beneath us and we called down to him, hoping we might get one of the baseballs lying on the grass. He didn’t toss us a ball, but he looked up with a smile and a wave, and that made our day more than anything that happened in the game. 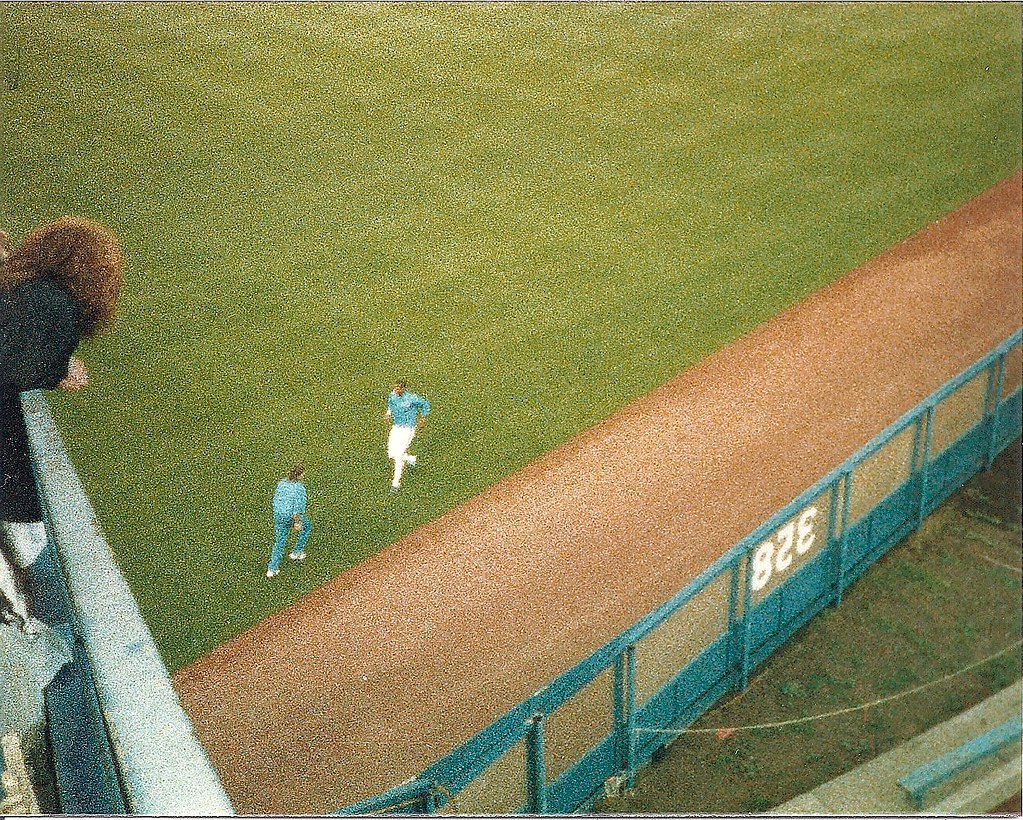 « What a destructive day!
How’s this for a cover jinx? »