When I began this blog several years ago as a means to continue to write about baseball after I left sportswriting, I had no plans to use it as a money-making venture. And I still don’t; I simply do it for fun. But I’m not against using this space to promote a good cause, which I have a chance to do today with an advance look at a new initiative involving a Hall of Famer, a popular internet search site and the leading organization in the fight against breast cancer. 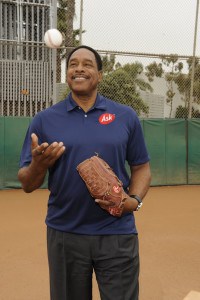 Next week, roughly midway between Major League Baseball’s Mother’s Day push to fight breast cancer and the Father’s Day effort to raise awareness about prostate cancer, Hall of Famer Dave Winfield will join the lineup of ballplayers trying to raise awareness for a cure. Winfield has teamed with Ask.com to participate in the website’s Answers for the Cure program, which benefits Susan G. Komen for the Cure — the same foundation that aligns with MLB on the second Sunday of each May as players wield pink bats and wristbands on the field that day.

Beginning next week, Winfield can be seen in a new public service announcement encouraging fans to join the fight. For each person who joins the Answers for the Cure program in 2010, Ask will contribute 10 cents to Susan G. Komen for the Cure, with a guaranteed minimum contribution of $100,000. It’s a cause close to the big man’s big heart.
“My mom passed away from breast cancer, so this is a really important cause for me,” Winfield said in a press release. “I know firsthand what it’s like to have questions about the disease and want to get involved in ending breast cancer. Ask is providing an easy solution for answers, education and awareness and I’m proud to be partnered with them in support of Susan G. Komen for the Cure.”
Personally, I’ve been lucky. The closest breast cancer has come to my family is a few close friends, all of whom have fought it off and are still with us today. My father survived prostate cancer — along with Joe Torre, Rudy Giuliani and many others. It’s unlikely that any of us have gotten this far in life without knowing someone close who has either fought off or succumbed to cancer in one form or another, and it’s great to see Winfield aligning his Hall of Fame name with this cause.
Winfield is part of my earliest baseball memories. He played left field for the Yankees in the first Major League game I ever attended, at Yankee Stadium on Aug. 21, 1983. It was a 2-1 Yankees win on a Sunday afternoon, and for years — nearly 20 of them, in fact — I thought that one of the thrills of the day was seeing Reggie Jackson play for the Angels. Years after a certain anxious summer in New York and a burning fall, he could still cause a stir in New York, even for a 6-year-old who had no memories of ’78.
But upon discovering Retrosheet, I learned that Reggie didn’t play in that game. The “R. Jackson” in the box score was Ron Jackson, who played third base for California that day. Don Mattingly and Hall of Famer Rod Carew each pinch-hit that afternoon, but did not leave impressions on me. Reggie left one that was inaccurate. And even though he went 0-for-3, Winfield was the only other player who stood out in my mind decades later. (It turned out to be a star-filled game for my first one — in addition to Carew and Winfield, Hall of Famer Goose Gossage got the win in relief of Dave Righetti. Also in that game were Willie Randolph, Ken Griffey, Don Baylor, and Fred Lynn.)
Now, 27 years after I first saw him play, Winfield is still leaving an impression on me by giving his time and notoriety to a good cause. So take a minute (literally) to see what he has to say and click through to help Ask.com contribute to help in the Susan G. Komen effort to find a cure.
« The Kid bows out of the picture
I wasn’t there: Indians-Senators, 1939 »