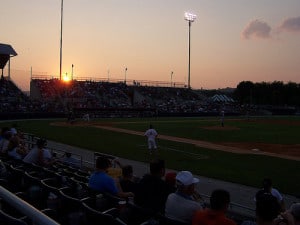 It’s kind of a shame that the Sussex Skyhawks won’t be part of the Can-Am League in 2011. Various issues — from attendance to the ballpark lease to both the team and ballpark (owned by separate entities) being up for sale — led to the club folding.

I suppose, technically, it could be a temporary hiatus. If new owners were found for the team and the ballpark and, if it’s not one organization that buys both, an arrangement could be worked out, it’s certainly possible that the team could resurface. The Can-Am League would certainly prefer to bring back an anchored team instead of fielding a traveling squad, which is what they’ll do in 2011 to give the circuit eight franchises. But I’m not holding my breath.

I’ll admit that the distance to that far corner of New Jersey made Skylands Park a difficult ballpark to get to, and while I hadn’t been since 2005 — the last season of the previous tennant, the St. Louis-affiliated New Jersey Cardinals — I still looked forward to getting back there. The drive up to Sussex County (for me, west on I-80, then north on Route 15) has to be the prettiest route to a ballpark in the state. Once there, the tiny field was nestled among the cornfields and trees, only a few miles from the Appalachian Trail. I seem to recall an article one season about the manager and perhaps a few players or coaches spending the summer camping instead of lining up with host families. Now compare that to league opponents like Staten Island, Brooklyn and Lowell, clubs located in cities, big and small.

There was something so nostalgic about a ballgame at Skylands, and it wasn’t just the rural setting and the thoughts of Field of Dreams. The ballpark was designed to blend in with the red-barn architecture of the area. I think the only thing that could’ve made it more wholesome would’ve been if it were situated alongside the county fairgrounds. The place oozed Americana. I mean, check out the drive-in across the road.

And so much for the Can-Am fielding three teams in the eight-team league. Now it’s down to just the Jackals up the road at Montclair State and the Newark Bears coming aboard. They’ll have to come up with a trophy for the head-to-head winner, but it would’ve been nice to have a three-way, round-robin competition for New Jersey Can-Am supremacy.