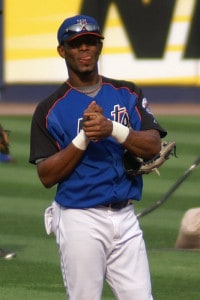 Outstanding move by the Mets to lock up Jose Reyes through 2010, or possibly through 2011. He’s one of three players for whom you could make the case is the Mets’ MVP. With Reyes, Carlos Beltran and David Wright all worthy of consideration, Albert Pujols is almost assured of taking it for the second straight year because those three Mets will split votes. If Beltran continues his torrid second half and finishes with numbers near Pujols’, he’ll have the best chance of giving the Mets their first MVP award.

It should be their second, following Darryl Strawberry’s outstanding 1988, which was better than Kirk Gibson’s season. But Kevin McReynolds seemed to take some of Strawberry’s votes. I wonder if the results would have been different if we viewed OPS the same way in 1988 that we do today.

Signing Reyes — and buying out his arbitration years — just adds to the feel-good story of this 2006 season. Wright will probably be next, whether it’s done this season, during the offseason, in spring training or next season. And this announcement should finally erase the memory of the bad dream I had a few weeks ago — a dream in which Jose Reyes signed with the Yankees.

Not gonna happen. At least not during these formative, productive years.

« Will the Angels regret three weeks in June?
Faces on the mound »