If teams are supposed to bring at least four starters to road games in the spring, how do you tell with the Orioles?

That’s a question I asked my new friends as we watched the Mets and Orioles from the second row behind home plate at Tradition Field in Port St. Lucie. The lineup on this day featured holdover veterans Aubrey Huff and Jay Gibbons, and then … probable center fielder Adam Jones (who had been acquired from the Mariners in the Erik Bedard trade) and eventual Opening Day starter Jeremy Guthrie. All-Stars Brian Roberts and Nick Markakis didn’t make the trip, though the two New Jersey guys I’d met this morning and the Frenchman who had joined us walking around the complex thought that third baseman Mike Costanzo was Markakis, and shouted at him during batting practice based on that assumption. 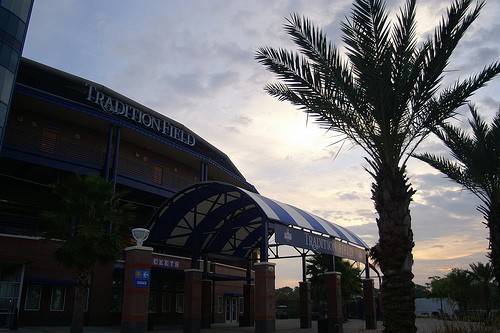 I’d been at the ballpark since 7:30 a.m., taking a shot at catching some of the players as they arrived for work. I saw some — Carlos Delgado in his Mazerati pulling into the fenced-in players’ lot, Johan Santana and Aaron Heilman through the screen over the fence as they walked from their cars into the clubhouse — but only Heilman acknowledged us, saying he had to get inside. There were only five of us, yet still no willing signers.

Port St. Lucie was the best stop of the trip. It might’ve been the familiarity of the club or the relative friendliness of being with my own fans. At Dodgertown, I could’ve easily had Jason Schmidt’s autograph, but I didn’t have much of a desire. But in St. Lucie, I went to bed at 10 p.m. just so that I could get up at 6 o’clock to be at the complex by 7:30. I was, literally, the first fan there.

After a walk around the main field, I returned to a spot near the players’ lot and met Jamie and Michael, the two brothers from central Jersey. We became fast friends and spent the day talking baseball. When I mentioned that I had to go buy a ticket to sit in the seats because I’d bought a berm-only ticket, they handed me one of their two spare complimentary seats two rows away from the Mets’ on-deck circle. I even ended up in the aisle seat.

After two hours of nothing — no players came over from the lot, though as I said, we saw Delgado, Santana, Heilman, Jose Reyes, David Wright, Brian Schneider and a few others, even if we were unsure of exactly who they were — we walked through the practice fields with three fans from France who had made the trip and happily joined us around the grounds. Jamie and Michael saw two minor leaguers they’d gotten to know from going to games at Binghamton and Trenton — Tim McNab and Mike Nickeas — and we caught the big leaguers warming up for batting practice on Field 7, the one reconfigured with CitiField’s dimensions. The outfielders were learning the angles just as we were usured out at 10:30, when the gates closed. 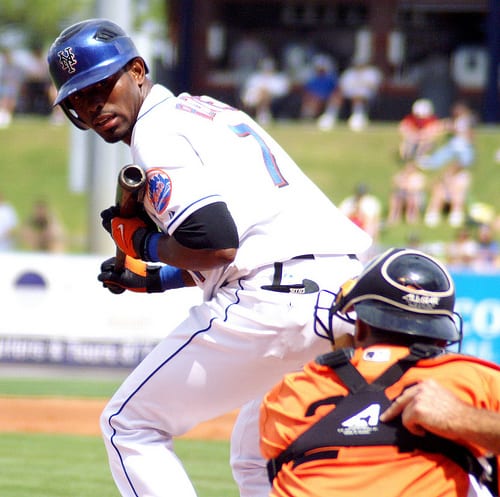 Though the Mets may have been the most unaccomodating of the three teams I saw — no way to get autographs as the players arrive, only a short hour or 90 minutes to roam the fields, and a way-to-early forced exit at 10:30, then limited access near the dugout — I enjoyed the brief glimpses in Port St. Lucie the most. But based on what others said about charging for workouts, I suspect the Braves are more uninviting. I arrived too late at the Disney complex to wander around, but I was told in PSL that Atlanta (or Disney) charges fans to enter the workouts. And though the Dodgers and Mets collected $5 for parking, that’s $5 if it’s one person in the car, but also if it’s four.

Once we entered Tradition Field at 11 a.m., we spent about 90 minutes during Orioles batting practice waiting for Mets autographs and got nothing. They never emerged from the dugout, having completed all BP and warmups on the back field. That annoyed me. I haven’t tried for any autographs in years, but I printed out some photos I’ve taken and felt an urge to meet a few guys for the first time in a long time. 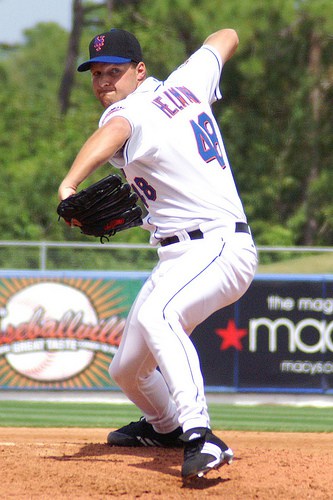 My photos from behind the plate on this day are stellar, in my mind. It was a great afternoon for shooting, which made up for the lack of autographs. The Mets starters — save pitcher Oliver Perez — played through the sixth inning, and following Perez, we got Wagner, Heilman, Joe Smith and Duaner Sanchez. After the game, I went with Jamie and Michael to see Omar Minaya, but didn’t think until much later that I should’ve mentioned my plan for the Home Run Apple to Fred Wilpon.

Jamie, Michael and I met up with the three French kids and the father/son pair from Islen once more before I headed north to my cousin Donna’s house, another long drive through Floridian desolation with the iPod shuffling and the Prius coasting.

Port St. Lucie — as remote and lonesome as it is, relative to the well-known Florida hotspots — was the perfect end to this initial foray into spring training tourism. I’m eager to go back, though not as eager as I am for the course of this season, which is bound to be interesting. I don’t know that I’d want to make it an annual trip (there are too many places I’d like to see to spend vacation time and money going to Florida every March), but I’d certainly be up for a somewhat regular return.