This is a random post just to see if the automatic Twitter update feature I set up works. [Two-minute update: It sure did, faster than my Google Reader, in fact.] I didn’t want to simply do a basic post that says nothing but “testing,” so I flipped through some photos and decided on this gripe.

Check out the photos below. I hate this — why would you want your team’s hat in another team’s colors? Shouldn’t an original hat be good enough? This is just lame.
I saw this Phillies cap in A’s colors at Notre Dame over Labor Day weekend. 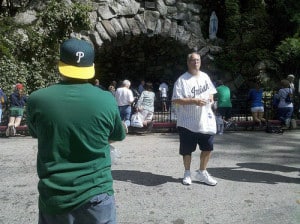 And this Yankees cap, also in A’s colors (I know the green and gold is pretty cool, but come on) was spotted at the train station in New Jersey, just a few days before I saw that Phillies cap. The guy is wearing a Yankees BP jersey and “NY” cap in Oakland colors on a night the A’s were playing at Yankee Stadium. So I assume he was going to the game. That’s idiotic. 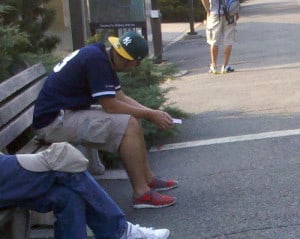 Why would you want your team’s hat in another team’s colors? Shouldn’t an original hat be good enough?
« And my mom wondered why I saved so many newspapers
Flashbacks about to become more common in southern California »