“First in war, first in peace, and last in the American League.” That’s what they used to say about the old Washington Senators, the hapless bunch of baseball men who couldn’t do much in two separate attempts at playing baseball in Washington, D.C. So this time, when they brought baseball back to the capital, perhaps they figured they should try the other league. Now — well, as of July 23, 2005 — they’re at least first in the National League (East). If two out of three ain’t bad, then I guess one out of three is … a start?

In posting Friday night’s account of the Mets game (see below), I found myself falling into bed at 1:30 a.m. on Saturday. I set the alarm for a not-late-enough 6:30, figuring on at least half an hour of snooze time onto the end of that. And it might have worked out that way … had I remembered to turn on the alarm. So at 8:15, I looked at the clock and thought, “Shoot. I suppose I need to get going.”

An hour later, I was in the car and soon I was zipping down the New Jersey Turnpike, Washington-bound, following the signs that said SOUTH. I find it sad, as I make a quick stop at the Walt Whitman Rest Area, that we’re about 90 miles into New Jersey, and the most prominent thing when you walk into the gift shop is a table covered with “I Love NY” t-shirts. It didn’t occur to me at the time that, of all the service areas on the Turnpike, I choose the Whitman one for my quick restroom run, considering his 1846 dispatch to the Brooklyn Eagle: “In our sundown perambulations of late through the outer parts of Brooklyn, we have observed several parties of youngsters playing ‘base,’ a certain game of ball … Let us go forth awhile, and get better air in our lungs. Let us leave our close rooms…the game of ball is glorious.”

Upon arriving in Maryland, I come to an empty house. Matt, the college friend I’d be going to the game and then staying with, was not home. I had called from the road to inform him that I was running late and he didn’t have to rush home from his girlfriend’s for my planned noon arrival. But I hadn’t been specific enough.

“Yo!” he says when he answers my call.

“I’m sitting outside your house …” I say in a mock-stalker voice.

“I suppose I should have actually given you a time at which I would be arriving,” I said. But soon, after bringing another college pal, Brad, into the conversation, we came up with a remedy: I would get back on the Beltway and the three of us would meet in Arlington, Virginia, where Matt was and near Brad’s home. We were to meet at Baileys Pub and Grille at the Ballston Common Mall. When Brad first mentioned the place, some interference in our cell phone connection garbled his voice a little, so on the drive down, I tried to figure out why a suburban shopping mall in Virginia — a commonwealth full of its own rich Colonial history — would choose to name itself after a New England village green, Boston Common. As it turns out, the mall is roughly the size of Boston Common, so the similar name is appropriate.

After lunch and ice cream, talk of baseball and bachelor parties, Matt and I swing by his house again to leave my car as we head across the District to RFK Stadium. Traffic and then unexpected closure of Matt’s regular parking lot — the former, we believe, caused at least in part by the latter — prevents us from getting through the turnstiles in time for the first pitch. Or the 31st pitch. Not only do we listen to the top of the first on the car radio, but we get into the bottom of the inning before we park and start walking up the hill to the stadium. Inside, we find Cristian Guzman batting — a term used loosely when it comes to the .180 hitter — with two outs and a 4-0 Nationals lead. Settling into our seats, I spot a fan walking in the field seats below wearing a Guzman jersey and I wonder if he’ll get his money back. I’m sure the Nationals would like theirs back. 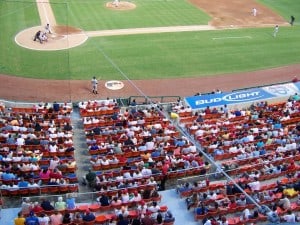 Opened in 1962 for the second incarnation of the Senators, RFK slid in front of Shea Stadium to become the NL’s third-oldest ballpark, behind Wrigley Field and Dodger Stadium. It certainly looks and feels like a 1960s multi-purpose stadium. Now that the Redskins have moved out, RFK — or The Rob, as Brad calls it — again splits its time morphing from a baseball stadium to a football one and back, only now it hosts international football in the form of D.C. United and Major League Soccer. There are no box seats, I notice as I look down. The best they could do was put new, soft blue cushioning on several sections behind home plate and put a table into a small box down in the front row directly behind the catcher. At some point, it’s clear that they decided they needed more premium (as in high-priced, not high-quality) seats, so they cut off the continuous walkway by inserting seats at intervals that stretch from behind the first-base dugout around to the one on the third-base side.

With the score already 4-0, there’s not much left for us; Washington cruised from there. Tony Armas Jr. carried a no-hitter into the sixth inning before a walk to Craig Biggio ahead of Lance Berkman soon becames a 4-2 Nats lead: Berkman deposited a pitch over the right-field wall for the first hit of the game.

The atmosphere is as electric as it was on Opening Day, now that Washington has risen to first place and we’re just over two months away from the end of the season. Matt has become friends with his fellow season-ticket holders, chatting with the two men to his right and the family behind us. One of the regulars points out how the numbers on the outfield wall designating the distance from home plate have moved. Those that read 380 feet that were once in right-center and left-center field are now closer to their respective foul lines, more straightaway right and left. First it was players who couldn’t believe their drives to the gaps were falling short of 380 feet; they argued that it was at least 20 feet deeper. When the grumbling got louder, someone decided this matter needed to be settled. Lasers were involved and, indeed, those 380-foot power alleys are actually 394-foot gaps where home runs go to die.

For two nights now, I’ve been a part of large, spirited crowds. Washington’s doesn’t quite measure up to Merengue Night madness, but those were special circumstances. Both the Mets and the Nats are teams comprised of loose, laid-back players who feed off of the fans. When Shea starts rockin’, you can see the Mets players quietly taking it in, the energy of the fans spurring them on. The same thing happens in Washington, where 81 home games likely won’t be enough to make up for 33 years without a team. In two nights, I’ve been among 92,953 spirited, knowledgeable boosters. In New York, the fans have suffered through high expectations and low results for years now; in Washington, each home run, each big hit, each key strikeout seems to be followed by a release of cheers and applause that have been building since the Nixon Administration. By that logic, the fans in Philadelphia should be exponentially louder — they’ve been stuck with underachieving, underwhelming, hapless teams for decades. How they’ll be on a scorching Sunday afternoon at a sparkling new ballpark remains to be seen.