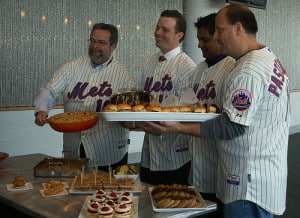 My wife and I had the chance to go to Citi Field today for the unveiling of this year’s menu. I’ll leave the full culinary write-up to Casey (look for it on Opening Day, because she’s timely like that), but I will say this: It’s a big advantage to eat in pairs. We were able to sample more by sharing, particularly splitting a burger from Shake Shack. Not that we needed to sample it, but it was free. Like we were going to pass that up. So we ate well, to say the least.

The 2009 season at Citi Field was a rookie season for sure, and I think the changes, improvements and upgrades will be readily noticeable throughout the ballpark this season. In some ways, maybe it’s understandable that some things wouldn’t get done, some of the more cosmetic aspects of the design, the first season. (That said, I don’t recall hearing about any lack of history at Yankee Stadium, but I haven’t been there for a game yet. Plus, we all know how obsessed they are with every last detail of their history, so I’m sure they were planning way ahead for that.)

As for what’s in store for 2010, most notable, to me, is that the Mets have expanded access to the Caesar’s Club, Promenade Club and Acela Club. In other words, a wider range of tickets (and prices) now will get you into those more exclusive areas. For many of us, the open air and a Shackburger are more than enough to enjoy a game, but it’s nice to know that, if those areas are going to be there, more people will be allowed into them.

Other additions throughout the ballpark include the gluten-free foods, Hanover Cafe Korean cuisine and Tai Pan Chinese, and a rum bar, all at the World’s Fare Market. The Excelsior level will have sit-down dining in the Caesar’s Club, and Big Apple Brews will have an additional outpost in the food court behind home plate on the Promenade level. 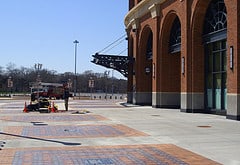 And many of the chefs are adding menu items: grandma slice with vodka sauce at Cascarino’s (outstanding; I’ve had it at other places) and a crab cake sandwich at Catch of the Day were two that stood out.

Finally, I approached executive vice president Dave Howard to ask about the Game 7 marker in the Fanwalk, and he said that it would be corrected. “It may already have been removed,” he said. And sure enough, as Casey and I walked around the outside of the ballpark afterward to look at the Mets history markers, workers were installing a generic Fanwalk panel in a spot that fell in line, chronologically, with where Game 7, 1986 would be.

Opening Day is 12 days away, but this made it seem that much closer. Starting to get excited now …

« Why not Tejada?
When Gooden was larger than life »