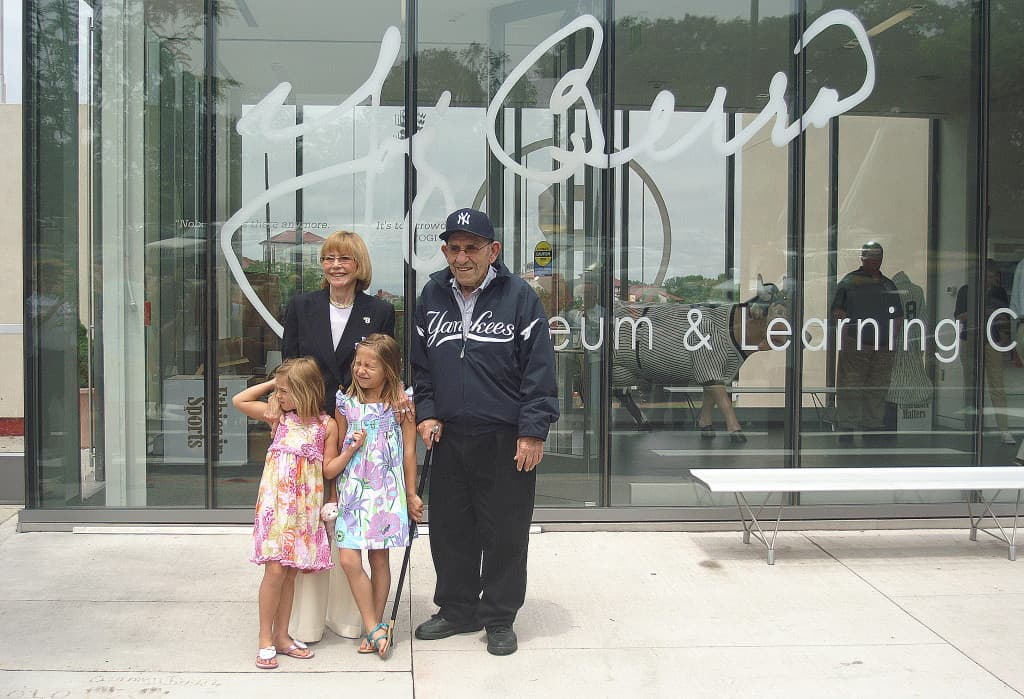 Carmen and Yogi Berra, with their granddaughters, at the reopening of the Yogi Berra Museum and Learning Center.

I was away last September, traveling around Northern California with my wife for our 10th anniversary, when just before bed one night, I got the alert that Yogi Berra had passed away.

Being on vacation, I wasn’t going to take the time to write up my thoughts. I posted a photo to Instagram and planned to reflect more on Yogi when we got home.

One of my great thrills in life was meeting this man. A legend and a gentleman. RIP, Yogi.

Obviously, I never made the time for it. October came, and with it the postseason. The Mets made their run and I loved every minute of it. In November, I powered down, took a step back from baseball and enjoyed a month of college football. Then the holidays, when I figured I’d make a point to write about Yogi as the year came to a close, those days when we all reflect back upon the last 12 months.

With the passing of Monte Irvin, I decided to make the time for Yogi.

I grew up in a Mets family, where blue and orange were the colors we cheered. In the mid-80s, when I really got into baseball, Yogi was off in Houston, wearing the garish/glorious tequila sunrise stripes and coaching in a dome with a green plastic field. This was 20 years past Yogi’s brief Mets playing career, a decade after his time as their manager. Though I was a Mets fan, Yogi was a Yankee. And though reading a couple of Lou Gehrig biographies made me admire the Iron Horse and put him right up there on my short list of favorite Yankees, Yogi held the top spot.

Part of the reason for that was, like me, Yogi was a Jersey guy. Not by birth, obviously, but once he was established with the Yankees, he never left. He first lived in Bergen County, just over the George Washington Bridge from New York, not far from Yankee Stadium. In the 1950s, he and his wife, Carmen, moved to Montclair, where they lived until the last few years of their lives. Yogi and his teammate Phil Rizzuto opened a bowling alley in Clifton, the town where I live now. I wish the building was still standing, that it was still a bowling alley, but it’s just another Jersey strip mall now; if the actual structure remains, it’s a Dress Barn. My mom grew up near here, in another town near Montclair. She once told me how she took piano lessons from the same teacher that taught one of Yogi’s sons; not Dale, who’s younger, but maybe Larry.

My path crossed Yogi’s three times over the years. The first was maybe 12 years ago when a magazine I was working for sent me over to the Yogi Berra Museum and Learning Center at Montclair State University to cover his birthday party, an annual event in the museum’s theater. It’s the only time I attended, but I often noted it over the years as the coverage grew — about a dozen TV cameras were estimated in attendance at his 90th last year.

After covering the main presentation of a cake, on which Yogi blew out the candles while surrounded by a youth team, a museum representative pulled me aside to show me part of the museum. “Wait here,” she said, leaving me to gaze upon Yogi’s 10 World Series championship rings or some other display. Soon I noticed she was coming back, walking with Yogi and one or two other people as he left the theater. She waved me over and introduced me, and I still remember how his big, catcher’s hand engulfed mine. It wasn’t a hard, crushing handshake, but it was firm, clearly the grip of an athlete. But it was comforting, too.

The next meeting came six years ago, in July 2010. I was standing in Barnes and Noble when my phone rang. It was an editor where I work, asking, “You live in New Jersey, right?” When I told her I did, she said, “Can you get over to Yogi Berra’s museum? George Steinbrenner died and Yogi’s holding a press conference in an hour.” I went home to grab a notebook and recorder and headed over to listen to Yogi, Carmen and Dale reflect on the life of The Boss with laughter, tears and reverence.

A year later, the museum reopened after undergoing an extensive renovation, and Yogi cut the ribbon to welcome everyone inside to see the new layout. The redesigned murals and exhibits took us through Yogi’s life, with the man himself standing there among it all. He walked with a cane then, but went everywhere with a smile — if not on his lips, then in his eyes. I got some great pictures that day.

I haven’t been back in a while, a few years now, but I should see what they’ve got going on over there and go take a visit. It’ll be good to visit Yogi again.