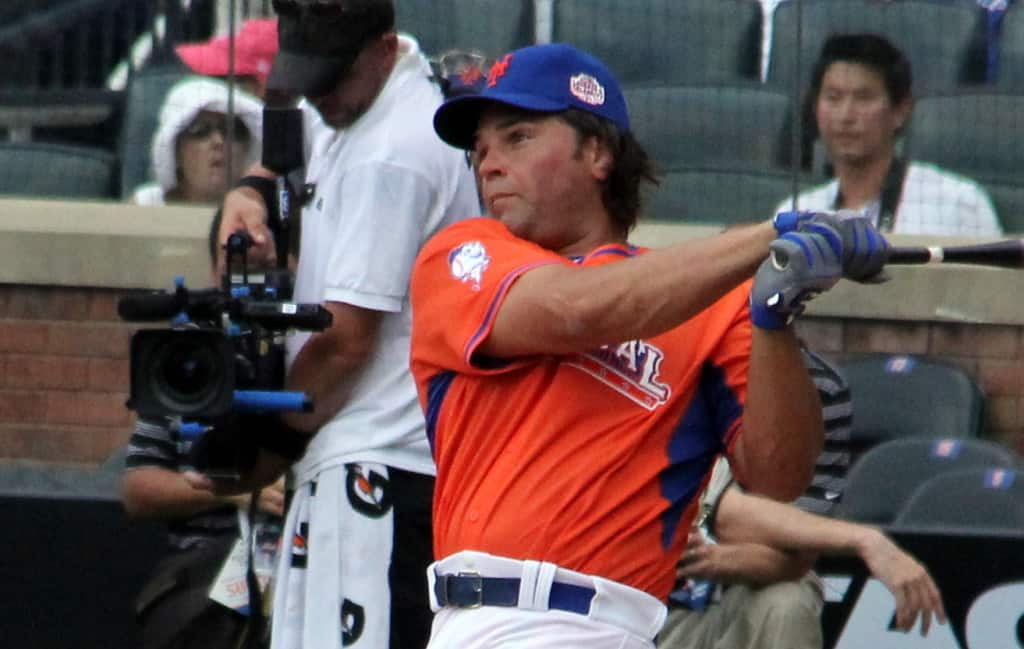 Even playing slow-pitch softball as a retiree, Mike Piazza shows off a sweet swing.

I wrote the other day about my lasting Ken Griffey Jr. memory, involving his iconic Upper Deck No. 1 rookie card. My Mike Piazza memories are much deeper and more centered around his performance in games, both those I attended and others I watched on TV.

I graduated college on May 17, 1998 — the day David Wells pitched his perfect game. Among the booze and revelry of Senior Week, I took note of two events in the outside world. On May 14, Frank Sinatra died, and the Dodgers traded Mike Piazza to the Marlins. Even then, I think I took note of the deal (Todd Zeile also to Florida! Bobby Bonilla, Charles Johnson and Gary Sheffield to the Dodgers!) and didn’t think Piazza was long for Miami. But I didn’t dwell on it long enough to contemplate where he might end up.

The day after graduating, I drove home with no job lined up. I knew what I wanted to do (be a sportswriter) and had an interview or two lined up (mostly phone interviews), but I wasn’t in a hurry. Realizing that it could be decades before I had a summer ahead of me with so few responsibilities, I was planning a solo, round-trip, cross-country adventure. With tickets to a Yankees-Mets game at the end of June, my targeted departure date was sometime shortly after that contest.

So I joined my family on our annual Memorial Day weekend trip to Cape Cod. We arrived early to Hyannisport, ahead of the friends who owned the house, and killed time having dinner at Craigville Mexican and Pizza. My seat in the dining room faced a TV over the bar, where I glanced up to notice SportsCenter showing Mike Piazza in a Mets cap. I think my sister — the one member of the family who’s not a big baseball fan — was next to me, our parents across the table, their backs to the TV. “Oh my god,” I said, interrupting someone’s conversation. “I think the Mets just traded for Mike Piazza.”

Of course, they did, giving up young outfielder Preston Wilson as the main piece, as well as a decent pitching prospect at the time, Ed Yarnall (and Geoff Gotez, who never reached the Majors). The friends who own the Cape house are also Mets fans, so we all talked excitedly about the deal, then watched the highlights the next day after Piazza debuted for the Mets by catching an Al Leiter shutout and driving in their second run with a two-out double in the fifth. He scored the first run in that Subway Series game I attended at the end of June (when the Mets won, 2-1, on a Sunday night after Carlos Baerga dashed home on a Luis Lopez sacrifice fly in the ninth), and then I hit the road. As a result, much of the rest of that Mets season is a blur.

In the offseason, Piazza re-signed with the Mets without really exploring free agency. One national columnist enraged me when he criticized Piazza for only being “about the money,” choosing to compare him to Bernie Williams, who had done the noble thing and re-upped with the Yankees. Yet the writer completely ignored the fact that Williams flirted with other teams — particularly the Red Sox — likely as a means to drive up his asking price and get more from the Yanks.

“And if I happen to be so fortunate to go in the Hall of Fame, it’s definitely going to be in a Mets uniform,” he said at his press conference. 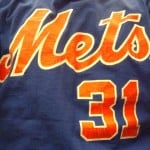 The next summer, I purchased a blue Starter T-shirt with Piazza’s name and number on it (today we call them shirseys) and cheered from home and the office. My evening work hours at a New Jersey newspaper kept me from the ballpark, and I attended just two Mets games (one in September and Game 1 of the NLCS in Atlanta) that season.

But the next year, I began my still-going streak of Opening Day attendance and saw nine Mets games in all. Two of them stand out.

The first was on May 21, 2000, a warm Sunday afternoon. Randy Johnson was on the mound for the Diamondbacks, and in the third inning, Piazza completely crushed a fastball into the left-field mezzanine — the green seats, where few home runs land. It’s probably the farthest- and hardest-hit ball I’ve ever seen in person. The shot was estimated at 492 feet, though it probably didn’t travel (or project to travel) that far; I suspect today’s more accurate tracking software would bring that figure down a bit.

And I was in the ballpark for the NLCS Game 5 pennant-winner, when Piazza went 1-for-4 with a double, two runs scored and sprinted from behind the plate to join the mob hoisting Mike Hampton after his complete game.

Piazza’s only World Series didn’t turn out the way he — or us Mets fans — wanted, both in the result and the fact that it was his only World Series. But that’s not all his fault. Griffey put up better numbers in his career and never even got there. There’s only so much one player in a game involving nine (at minimum) can do.

That 2000 season also “featured” the ridiculousness of Clemens vs. Piazza, when a fastball to the helmet felled the catcher on July 8 and kept him out of the All-Star Game. Act 2 was the broken-bat throw in the World Series (the first — but not the last — time that Clemens would offer an inane excuse; “I thought it was the ball” vs. “misremembering”). Act 3 came the next summer, when Shawn Estes tried to give Clemens a taste of his own medicine during an Interleague game at Shea. Act 4 could’ve been the most awkward Hall of Fame induction ceremony, because Clemens and Piazza first got onto the ballot four years ago — which would’ve been sports-talk-show catnip — but Clemens has yet to get the call. 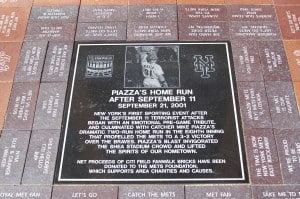 Commemorating the shot outside Citi Field.

As for what might be Piazza’s most iconic moment — the “9/11 home run” — there’s nothing I can add that hasn’t been said. I watched it on TV as most did, and I got emotional when that ball sailed over the center-field fence. That wasn’t just a baseball moment, that was a New York moment.

Induction Weekend 2016 would be a fitting cap to my Piazza memories, and I’ve already cleared my calendar should we decide to go, but it will also be a crowded, sweltering zoo. Having gone to Tom Seaver‘s induction, it would be cool to be present for the ceremonies of both of the players who represent the Mets on their plaques. When the Hall of Fame election comes up every year, there’s always talk about whether a guy was looked at as a future Hall of Famer while he was playing. I think Piazza fits that description as well as anybody, because from the start, it was clear he was one of the best-hitting catchers to ever play the game. This just confirms what we all knew at the time.