Count me among those who doesn’t think the acquisition of Roy Halladay makes the Phillies that much better. For 2010, at least. They essentially swapped out Cliff Lee for Halladay at the front of their rotation. They went from a lefty to a righty, from one who proved he could do it in that ballpark and in the postseason to one who has yet to prove either. They gave up a pretty durable guy to one who has had some issues in his career — but one who has also had a more dominating career, and been among the game’s best pitchers for some time now. But having Halladay beyond 2010 is certainly significant.

And, I’m sorry, but I just can’t kill the Mets for not getting Halladay. They didn’t have the pieces, especially after adding Johan Santana. Now, of course, the farm system is a problem, and they need to hire a strong architect to get it up to be among baseball’s best. And even the Phillies couldn’t do it after getting Lee last year — without trading Lee as well. So, in the end, to get Halladay, the Phillies gave up three of their top four in the year-end prospect rankings done by Baseball America — after giving up three of their top four and four of their top 10 prospects at the time to get Lee. So between the start of the 2009 season and the end of the year, Philly dealt away seven top prospects for Halladay. Sure, Lee may have put them over the hump into the World Series, but everyone considered them a strong contender for the NL pennant before they got Lee. Adding him may have just made it easier to get there — and to avoid a sweep by the Yankees. Had they just given the Blue Jays what they wanted for Halladay in July, they may have made out better, at least in terms of not giving up as much.

What really gets me is that the Blue Jays have to send any money to the Phillies. What the hell is that? The small-market team is giving the big-market team the cash? The are not hurting for revenue, setting a club record for sellouts in 2009 and clearly not bowing out of the pennant race anytime soon. And then the Phillies go and sign him to a $20M per year extension? So they can pay him $2o million in 2011, ’12 and ’13, but not $16 million in 2010? How so? 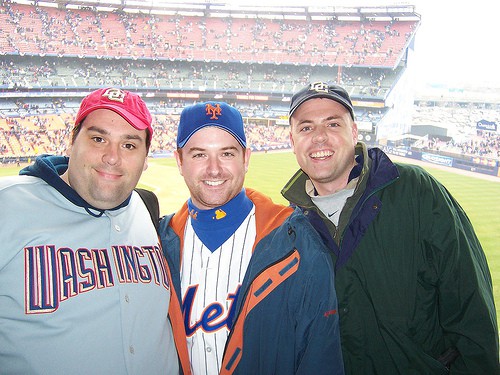 And also count me in the Blue Cap Army. I was always a member, even before it had a name or a movement. Here’s hoping it picks up steam in the months leading to Opening Day.

I love what Jose Reyes had to say on WFAN, especially the part about other teams taking offense to his celebrations on the field — because those teams, players, executives, managers are all full of crap. They’re hypocrites, because they or their players do it too. I’ve seen Hanley Ramirez whoop it up pulling into second base on an RBI double in the sixth inning even if the run didn’t change the score or significantly close/open the gap. And Shane Victorino is worse than Reyes. Don’t get me wrong — I don’t think Victorino should stop, and fans of opposing teams can and should take offense. But the fans can complain without being hypocritical, because we’re not the ones who make a point to clap demonstratively on an infield single.