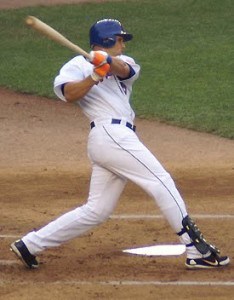 It has been 5 1/2 years since the Royals traded Carlos Beltran to the Astros in a three-team deal also involving the Oakland A’s. Houston, of course, only had Beltran through the 2004 postseason (that amazing eight homer, 14-RBI, .400+ postseason) before he signed with the Mets. The A’s got Octavio Dotel in the deal and used him to save 22 of the 45 games he pitched the rest of the way in 2004, but only got 15 games from in 2005 before he had Tommy John surgery. The following offseason, he signed with the Yankees.

And for dealing Beltran, the Royals got right-hander Mike Wood and third baseman Mark Teahen from the A’s and catcher John Buck from the Astros. Wood went 11-19 with the Royals through 2006, then signed with the Rangers. After pitching in 21 games for Texas in ’07, he’s spent the rest of his time on the Rangers’ and Marlins’ Triple-A clubs. Teahen averaged 14 homers, 70 RBIs and a .749 OPS in his five seasons with the Royals before they traded him last month to the White Sox for Chris Getz and Josh Fields.

Now K.C. has lost the last remaining player from that deal after non-tendering John Buck last night (in favor of new backstop Jason Kendall, who signed a two-year deal) and watching him agree to a deal with the Blue Jays.

So despite having their haul from the deal for the shortest time, the Astros probably made out the best, nearly reaching the World Series with Beltran in 2004 (and perhaps building the momentum or belief for their run to the Fall Classic in 2005). The A’s finished second in 2004 and 2005, the only years they had Dotel, but won the AL West in 2006. And the Royals never won more than 75 games or finished higher than fourth in the AL Central with the players the got in return for Beltran.