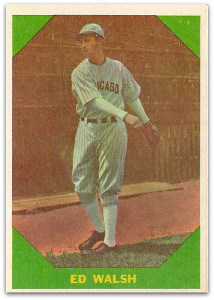 Back in August at the National Sports Collectors Convention in Baltimore, one of the many items I gazed upon and figuratively salivated over was a photo of Hall of Famer Ed Walsh and his sons, Ed Jr. and Bob, in Notre Dame uniforms. The boys were on the team and their father served as an occasional pitching coach during their years there. This Corbis photo and this one from the Notre Dame Archives — neither of which is the one I contemplated buying but passed because of the cost in relation to my budget that day — are just as intriguing for a fan like me. I suppose, in the back of my mind, that photo also helped inspire this ND to MLB project.

And so Ed Walsh Jr. becomes the third installment in the series because he was a teammate of the last featured player, Billy Sullivan Jr., on the 1932 White Sox. Sullivan caught Walsh on Sept. 11, 1932, in what Cappy Gagnon describes in Notre Dame Baseball Greats as a publicity stunt by Charles Comiskey. In reprising the roles their fathers had from 1904-12 — Ed Walsh on the mound, Billy Sullivan behind the plate — the younger pair established the quartet as the only father-son batteries in history, and for the same club. That one game was the only time that Billy Sullivan Jr. caught Ed Walsh Jr., though they appeared in three other games together, with Sullivan at first base.

Ed Jr.’s Major League career lasted only from 1928-32 (spending 1931 in the American Association), parts of four seasons in which he appeared in 79 games and compiled a record of just 11-24. He then found some success during his four seasons in the Pacific Coast League pitching for the Oakland Oaks. He went 19-15 in ’32 and compiled a record of 39-38 before packing it in at the age of 30 in 1935. On July 26, 1933, he put an end to the 61-game hitting streak of an 18-year-old Joe DiMaggio, then playing with the San Francisco Seals. DiMaggio went 0-for-4, though his sacrifice fly in the ninth won the game for the Seals.

If Ed Walsh didn’t have the same name as his father and hadn’t pitched for the same team, he probably wouldn’t have had a baseball card for me to pursue some 73 years after his death. (He died at just 32 in 1937 of “an acute heart ailment induced by chronic rheumatism,” according to his obituary in The New York Times. He lapsed into a coma at his parents’ home in Meriden, Conn., and is buried there.) This card, part of a 1960 Fleer set of “Baseball Greats,” mistakenly shows Ed Jr. in the place of his father. The error was never corrected, and because my goal with this project is to first try to obtain an image (a period image if at all reasonable) of each former Notre Dame player with one of his big-league clubs, this card fits the bill, even if it is a mistake.

« Setting impossible standards for the Phillies
Shea Stadium in 1965 »