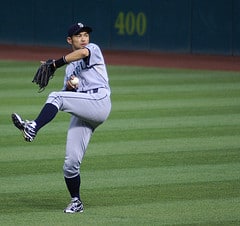 Sports Illustrated‘s review of the decade included the best of the magazine’s Sign of the Apocalypse and They Said It features from the front of the book, and my favorite subset of that segment was a breakout box they did of Ichiro’s greatest hits. A couple of these cracked me up at the time and made me chuckle again rereading them, so I want to preserve them here since I know I’ll eventually recycle the magazine.

April 23, 2007
On facing Red Sox pitcher and countryman Daisuke Matsuzaka: “I hope he arouses the fire that’s dormant in the innermost recesses of my soul. I plan to face him with the zeal of a challenger.”
June 25, 2007
On Seattle’s trip to play the Indians [Which, incidentally, is where I took this photo.]: “I’m not excited to go to Cleveland, but we have to. If I ever saw myself saying I’m excited going to Cleveland, I’d punch myself in the face because I’m lying.”
Sept. 17, 2007
On why he ran out of the baseline to escape a potential rundown: “I hate being touched by other people. I’d rather run away from them.”
Sept. 7, 2009
Explaining to The New York Times his thoughts on the notion that “chicks dig the long ball”: “Chicks who dig home runs aren’t the ones who appeal to me. I think there’s sexiness in infield hits because they require technique. I’d rather impress the chicks with my technique than with my brute strength. Every now and then, just to show I can do that too, I might flirt a little by hitting one out.”