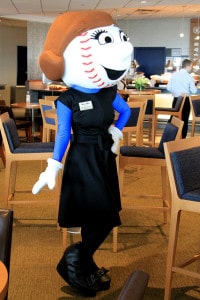 Today’s Culinary All-Stars event at Citi Field was meant as an unveiling of the food offerings for next month’s MLB All-Star Game at the ballpark, but it was the unannounced appearance of walking, gesturing Mrs. Met that drew as much attention as the myriad food samples on display at the Caesar’s Club.

I tagged along with the wife, who was invited by Aramark, and if there was anything that was going to pull me away from the (limited edition) All-Star Meatball Hero, it was a big-headed woman walking into the club. She was there — with a nametag, as if she needed one — to glad-hand the guests and pose for photos. She looked hungry, though she tried to hide it behind that ever-present smile.

She’s not much for words, so it’s not like we chatted for a bit. I did talk with one of the retail (hats, jerseys, etc.) managers, who said that Mrs. Met does have a uniform, so I suspect she’ll be making some appearances during ballgames, as well. We’ll have to see this weekend.

As for the food … I should have fasted more. As in skipped dinner last night. There was just. So. Much. The last time we went to one of these events, before (I think) Citi Field’s second season, we split a Shackburger, simply for the pleasure of having a free Shackburger. This time, we didn’t think of it, not with Mex Burger sliders (a smaller version of the burger from Keith’s Grill), lobster rolls from Catch of the Day, mac and cheese (lobster, bacon and three-cheese options) from the suites menu, beef brisket sliders from Blue Smoke, fries from Box Frites and, from the in-house chefs, loaded tater tots (cheese, bacon and scallions), several panini sandwiches and the aforementioned meatball hero. And that’s just what we sampled and shared between us. There was pizza and sushi and Pat LaFrieda meats and Mama’s of Corona sandwiches. I’m not sure you could get through it all in a nine-game homestand, and this was meant as an unveiling for just a three-day event — the Futures Game and Celebrity Softball Game, the Home Run Derby, and the All-Star Game itself. Anyone attending all three will definitely not go hungry.

If you’re attending any of the three events, bring your appetite (and, no doubt, your credit card), and be sure to seek out the All-Star Meatball Hero (available near Section 138) and some of the other new or unfamiliar offerings. The Mets and the vendors are rolling out some all-star eats for an All-Star event.