My exposure to Harmon Killebrew was minimal. His final game came a year before I was born, and I can’t recall him ever appearing at card shows when I attended those events growing up. As an avid collector with an insatiable appetite for baseball trivia as a seventh/eighth grader, if you’d asked me to name the 500 home run club (which, in the late ’80s, consisted of just 14 men), I’d probably get 12 or 13 pretty easily, and then have to think longer to remember Killebrew. That’s no fault of Killer’s. I grew up in New Jersey; the Mets were my team. Baseball was long gone from Washington and the Twins were known for Kent Hrbek, Kirby Puckett, Dan Gladden and Frank Viola. 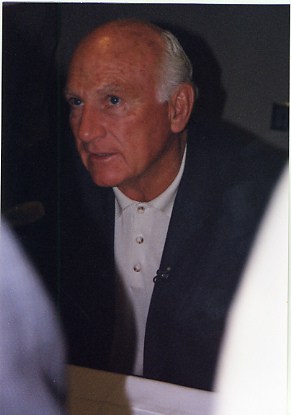 But I think Harmon Killebrew would’ve been the kind of player I really liked, an underdog of sorts among the game’s greatest sluggers. He may have been listed at six feet tall, but it seems he was probably an inch or so shorter. If some photos I’ve seen today are dated correctly, he was bald before he was 30. And in recent years, while some of the living members of the 500 Home Run Club still look like they could give the ball a ride, he looked as much like your middle-school principal, your barber or your pharmacist as he did the 10th player to reach that long ball milestone.

My one encounter with Killebrew came before the 2004 All-Star Game, when MLB brought the living members of the 500 Home Run Club to Houston for the Home Run Derby. It was amazing being in the same room with all of those sluggers, not to mention the Commissioner of baseball and the top sportswriters in America. As I mentioned in that blog post, I considered asking some questions of a few of the legends, but with no assignment or specific questions in mind, I decided I’d rather get photos of each of the guys. I’m happy that I did, but looking back, it’s unfortunate that 2004 was still the beginning of the digital age — I was still working with a film SLR and had no way to know how my shots turned out until getting the prints back from the lab. My shot of Killebrew is OK, but the flash bounced off a few sportswriters in front of me, putting Killer in the shadows when he deserved the spotlight alongside his peers in that room.