I graduated from college in 1998, so that was a special summer for me, too. I set up my spring semester schedule to only have classes on Tuesdays and Thursdays. My friends and I popped champagne on our apartment balcony after our last finals. We caught a Cardinals-Cubs game at Wrigley Field on a pleasant May afternoon. After the commencement ceremony — which took place on the same day the Yankees gave away Beanie Babies for a game against the Twins (and David Wells pitched pretty well, I believe) — I came home to New Jersey and spent six weeks going to a few graduation parties and planning my cross-country trip.

And all that summer, as I drove out to California and back, I followed what has become known as the Great Home Run Chase. Mark McGwire, Sammy Sosa and the ghost of Roger Maris. I saw McGwire hit home run No. 12 that season, a ninth-inning two-run shot off of Rod Beck in a game the Cubs won, 6-5. When I stayed in Major League cities, I checked the schedules to see if the Cardinals were in town, just missing them in San Diego when I was in L.A. and in Colorado when I got into Denver. And in a small bit of personal symmetry, I was back on campus in South Bend, watching the Labor Day afternoon game on ESPN when McGwire hit his 61st long ball that season. An interview for a job with a local newspaper kept me in town the next night, too, when I watched him hit his 62nd. I might’ve teared up watching it happen. 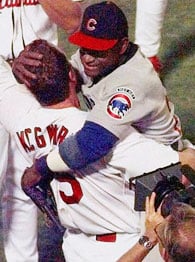 It was all so compelling: missing first base in the excitement, high-fives from Cubs infielders as he rounded the bases, a bear hug with his son at home plate, Sammy Sosa’s sprint in from right field, his tearful embrace with Maris’ widow and sons. As baseball fans, how could we not become enthralled? The 1994-95 strike was still pretty raw, robbing fans of the World Series for the first time since John McGraw didn’t feel the Boston Red Sox, of the inferior “American League,” were a worthy opponent to his National League pennant-winning Giants in 1904. Cal Ripken may have broken Lou Gehrig’s consecutive-games streak in ’95, but that came too close to the strike — and he would’ve broken it sooner if it weren’t for the strike — to help the healing. We didn’t have enough distance. 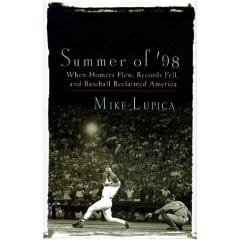 Three years, it seems, was enough distance to bring us back, to capture our attention with a chase at one of the game’s great records. We all watched, and few of us, I think, questioned it. Mike Lupica wrote a book about it. I bought it and read it and still love the cover image.

But even if we did suspect at the time that McGwire might not be all natural, we did so in a less accusatory tone. Yeah, it may have happened, but who can really say? It wasn’t like today, when accusations of performance-enhancing are not brushed off so easily and we find ourselves pausing to contemplate whether or not we think the player mentioned compiled his stats solely on his own ability. When McGwire first appeared on the Hall of Fame ballot, Lupica said that he doesn’t think McGwire should be elected. Bill Simmons called him on it. We’re all still trying to figure this out.

In 80 plate appearances against three admitted or widely suspected performance-enhancing pitchers, McGwire hit four home runs — two each off of Roger Clemens and Andy Pettitte and none against Jason Grimsley. He struck out 14 times vs. Clemens (in 53 at-bats), five vs. Pettitte (in 21) and had none against Grimsley (but with four walks in six at-bats). But now that our suspicions are being proven, will we look at the steroid era any differently? Will it someday come to the point that, yeah, hitters were juicing, but they were facing pitchers who weren’t clean, either? Are others going to come forward? Is Sammy Sosa next?

I never thought I’d be saying this, but I may not care anymore who was on steroids. With every new player whose name comes up, I think my outrage subsides a bit. I liked McGwire in the ’90s and I can’t say I like him any less now. I’m a bit disappointed, both in the fact that he decided to cheat and that he waited so long to come clean. But he still came clean faster than Pete Rose did for his transgressions and some of these other players we’ve got at the top of our suspected users lists. Knowing what I know now, confirmed, may sadden the 33-year-old me, but the 21-year-old from 1998 still remembers a great summer. 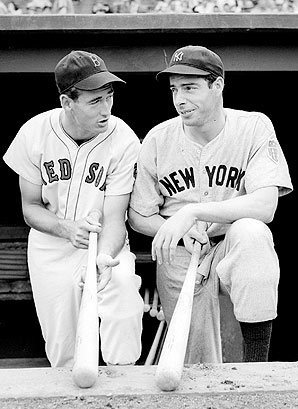 So maybe it’s time Bud Selig and the baseball writers just give amnesty to all the steroid and HGH users from the past up until the Mitchell Report came out. If you used then, ‘fess up, and all’s good. Yeah, the numbers McGwire, Sosa and Barry Bonds put up may not be fair to Roger Maris, Babe Ruth (Sosa broke Ruth’s record for home runs in one month) or Hank Aaron, but the 162-game schedule also wasn’t fair to Ruth and so many other advances in baseball and technology have also tilted the playing field — literally, in some cases. From expansion several times over to night games to domed stadiums to maple bats to elbow guards to dietary supplements to training regimens to ballpark design, the game has changed over the decades. Even comparing players of the same era is not fool-proof. Did Ted Williams hit 160 more home runs than Joe DiMaggio because he was more powerful, or did Yankee Stadium’s Death Valley in left-center rob DiMaggio of a glut of long balls? Or what if DiMaggio hit left-handed? Sadly, maybe this is another variable to consider. Maybe, as others have written, the Steroid Era has to be treated like antithesis to the Dead Ball Era.

I’m not going to go out and buy a McGwire jersey and I don’t see myself making an extra effort to get to batting practice and cheer him as hitting coach when the Cardinals come to New York. But I won’t boo him, either. I won’t make signs or yell insults. Maybe I’ve come to accept it, or maybe I’m just scared that the next name will be someone I truly adored, a name that will really upset me and shatter those memories of past summers.

« Which cap for Piazza?
Another shutout — and then some »