My wife has been on a nostalgia kick lately (not sure if I was any influence there) and has been going through all her old copies of Sassy magazine. I’m willing to bet that few, if any, readers of this blog are familiar with that publication beyond the name, even if you had a teen-aged sister growing up. (Apologies to any women reading this, but if you are, you haven’t made yourselves known.)

Anyway, she brought me the May 1992 issue with Bobby Bonilla on the “What He Said” page: 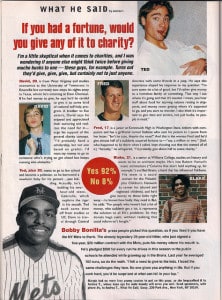 And here is a closer crop to better read the text: 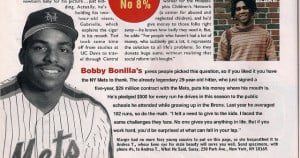 I like the “already legendary” description. Perhaps that meant he was the other half of the duo featuring the already legendary Barry Bonds.
So I’ve done the math (and the editing — Bonilla scored 102 runs in 1991, his last season in Pittsburgh, and drove in 100, which is the actual statistic they wanted for this blurb), and $500 per RBI in 1991 would’ve netted $50,000 from Bobby Bo. In ’92, when he delivered just 70 RBIs, he gave $35,000 to Bronx schools. Still a notable donation, but not quite what Sassy, the Bronx schools or Mets fans had in mind.
Oh, and if you haven’t heard, the Mets will be paying Bonilla through 2035. I do hope the schools got their money up front.
« Ike’s rookie power
Hitless, again »