As I’ve mentioned in previous posts of this series, one of the issues with trying to track down and collect evidence of the Major League careers of the 77 men who have passed through South Bend on their way to The Show is that so many of them were Domers long before the Majors became known as The Show, long before Topps came on the scene.

There are quite a few guys for whom I may have to fork over $10-20 for an autographed index card, or $5-10 for a reprint of a black-and-white photo. For others, it may take upwards of $30 (or much more) to land a tobacco card, and there are two for whom I’ve found signed index cards that would set me back triple figures (and it doesn’t help that one of those guys played for the Boston Braves in 1910-11 and shares the same name as an actor in one of those godforsaken tween vampire series AND the name of a golfer in the 1930s: Billy Burke). I’m trying to do this in a much more economical way than that. For some players, like Cy Williams, I’ve passed on the $30 autographed index card for a $3 Conlon card from 1991. For others, I will have to improvise. 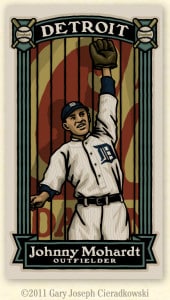 This is the first improvisation. I’ve been a fan of The Infinite Baseball Card Set since discovering it sometime last year through Uni Watch. In his blog, graphic designer Gary Cieradkowski researches players that interest him, then creates beautiful tobacco cards depicting the players from a particular part of their careers, often in the minor leagues or amateur and semi-pro stages. I purchased the first printed set he put out and it was from one of those cards — of Otto Rettig — that I learned of the Doherty Silk Sox semi-pro team that played in my current hometown of Clifton in the 1920s. Major League clubs would often make the trip to the ballfield behind James Doherty’s silk factory to play exhibition games — including the Cardinals, Phillies, Red Sox and Giants, bringing with them the likes of Rogers Hornsby and Babe Ruth.

Anyway, when Gary started asking for guest entries, an idea struck me: If I came across a player with a compelling story, the right background to really warrant such a fabulous tribute as inclusion in the Infinite Card Set, I would contact Gary to see if he’d consider it. I’d already been in touch with him to suggest a card of Jack Kerouac — and it turned out that he had already come up with the design long before I wrote him, so my e-mail send the card to the top of his list. This time, the turnaround was just as quick.

I wrote to Gary on Saturday, Feb. 5 with my proposal and included my full writeup so that he could learn the whole story should he want more background. Two days later, he wrote back and said he liked the idea. Last Thursday, he wrote again to say he had the front of the card done and just needed from me a 160-word summary for the back of the card.

And so I present to you John Mohardt, Irish football and baseball player from 1919-21. Detroit Tiger in 1922. Chicago Bear in 1925. And there’s a lot more. But I don’t want to take away from Gary’s efforts, so to read the full story on Mohardt, please visit The Infinite Baseball Card Set and then look around at some of the past entries. I’m sure you won’t be disappointed. Here’s the blurb from the back of Mohardt’s card to pique your interest:

Mohardt distinguished himself in three fields – the ballfield, the gridiron and the operating room – while playing with and for some of the largest legends in American sport. At Notre Dame from 1918-22, he was a teammate of George Gipp and Curly Lambeau under Knute Rockne. In Detroit, he took orders from player/manager Ty Cobb, who once called for the rookie to pinch-run for him. After a brief five-game Major League career, Mohardt played professional football, sharing a backfield on the Chicago Bears with the Galloping Ghost, Red Grange, under coach George Halas. When he wasn’t lacing up his spikes, Mohardt was earning his medical degree. With that in hand, he gave up his athletic endeavors for good. He worked at the Mayo Clinic before serving in the Army during World War II, then offered his services to Veterans Affairs after the war. He eventually relocated to Southern California, where he died by his own hand at the age of 63.