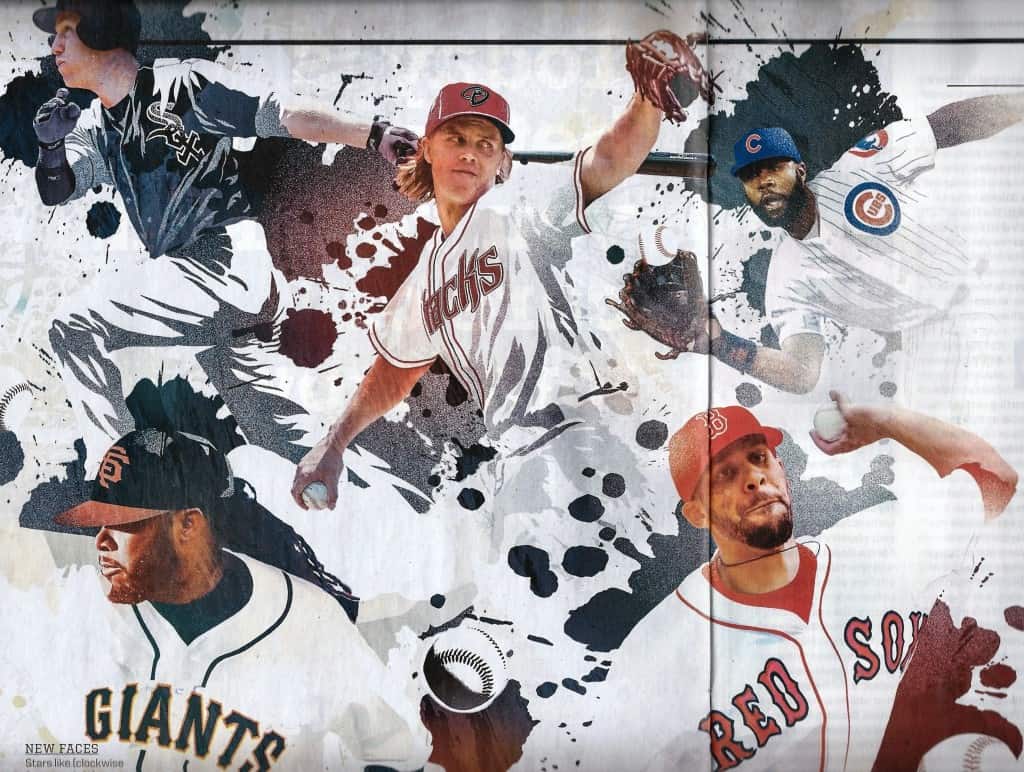 I keep gazing at this image in the latest issue of Sports Illustrated. What they’ve done is obvious: Some of this offseason’s biggest acquisitions are shown with their new clubs, but in an artist’s rendering because we’ve yet to see any of them in action in their new uniforms.

And for three of these, we may never see them in action in these uniforms. We’ll ignore the absence of pinstripes on the placket of Jason Heyward‘s Cubs jersey and say that’s pretty much what he’ll look like the first time he catches a sinking liner in center field at Wrigley. And we’ll forgive the missing stripe down Todd Frazier‘s White Sox pants. But let’s look at the other three.

They went ahead and put Zack Greinke into a Diamondbacks uniform, but they chose the font from the old design, rather than one of the eight new designs they unveiled this winter. Plus, they added piping down the center along the placket that has never been there. And the double piping around the edge of the sleeves isn’t exactly true to the D-backs’ uniforms, past or future.

David Price‘s Red Sox uniform is fine, but the cap isn’t. As far as I know, they’ve never worn a red cap with a red “B” outlined in white. The red cap of their past features a blue “B,” and even the “stars and stripes” alternates of recent years never had a red “B” on a red cap.

And finally, there’s Johnny Cueto with the Giants, who do not sport the black piping on their home uniforms (though they do on the roadies). The Reds do have it, so if a photo of him pitching for the Reds was used, it could be seen as a matter of changing the red piping down the placket to black, but since this is an artist’s rendering conjured up on a computer, why not just remove it completely?

« Have you ever wondered how London covered the 1969 Mets?
Porcello adds exit on New Jersey Cy-way »