I was caught off-guard this year. The Opening Series in Japan next week has thrown off my internal Opening Day clock. And so, when my Sports Illustrated was late to my mailbox this week, all I thought I was missing was an NCAA Sweet 16 cover.

But no! When I reached in on Friday, half a face of Albert Pujols was glaring back at me. 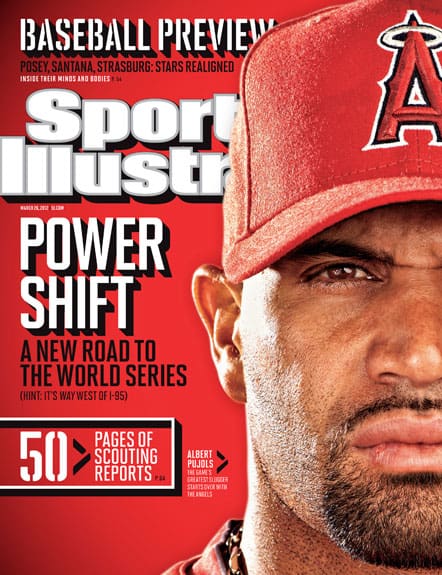 As with last year’s cover, it’s not much of a surprise. The biggest move of the offseason gets the featured spot on the annual baseball preview. This year, there’s no inset photo, so it’s only the Angels that get the tally in my running review of SI baseball preview covers.

Pujols’ appearance — his second, the other was in 2006 — represents only the second Angels cover in the history of the SI baseball preview. The other was Joe Rudi in 1977, which does not bode well. Rudi had signed with the Angels that offseason, and the cover bore the headline: “Joe Rudi: The Angels’ $2-million man.” He went on to hit .264 with 13 home runs and 53 RBIs for a fifth-place club. Somehow, I think things will turn out a little bit better for Pujols and the Angels.

Pujols does make history with this appearance, though. He appeared solo in 2006 and now again this year. Steve Garvey (1975 and ’82) is the only other player to have two covers to himself.

For the FULL breakdown of the SI baseball preview cover (and it is comprehensive), look here. Both there and below, you’ll find the updated stats.

That’s a total of 62 teams now on the covers (accounting for two or more players sharing the spotlight in some years). Through the 2011 season, 23 of those 61 teams (not including this year’s Angels, of course) made the playoffs, with the results as follows:

The Phillies were the featured team on the cover the last two seasons, falling in the NLCS in 2010 and the NLDS in ’11. But when it comes to regular-season standings, the editors have hit on top-two teams more than the other positions combined:

Here are a few more team-related numbers, all updated to include the 2011 Phillies and 2012 Angels and Pujols, where possible:

As for individual accolades, Roy Halladay‘s 2010 cover appearance made him the third player whose cover appearance foretold a Cy Young season, but that didn’t carry over into 2011. But the Phillies rotation last year did add three All-Star nods to the annals.

First base remains a strong third in most frequent apperances on the preview cover, with Pujols inching the position closer to outfield’s strong hold on second place. (Each player counts once, not as a group, meaning last year’s Phillies rotation counted for five starting pitchers):