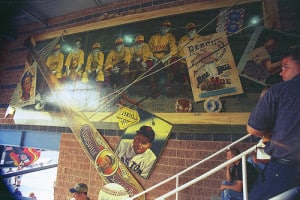 A mural at the entrance to the Sandcastle

Things are not looking good in Atlantic City. In some ways, that’s true of many aspects of the Boardwalk Empire (great show, by the way), but it’s especially true of the old ballpark where the Surf used to play.

Just two seasons after the club folded, The Sandcastle (I always preferred that moniker to its corporate-jeweler name) is fading fast. This great article (and video) in the Press of Atlantic City documents the stadium’s heartbreaking decay, including graffiti on the murals (one of which is shown above) that line the main stairway. I’m amazed that the pictures of the park just 21 months into its hibernation are quite similar to those of Paterson’s Hinchliffe Stadium. Perhaps the salt air accelerates the damage when the structure is not regularly maintained.

I visited The Sandcastle just once, in August 1999 during my “Summer of Dan” — the eight weeks I spent visiting and reviewing minor league ballparks in New Jersey, Staten Island and Fayetteville, N.C., where I looked at the state of the Cape Fear Crocs, who had been sold and would become the Lakewood BlueClaws in 2001. The Sandcastle was my last stop, park eight of eight, and I loved ending the series with the southernmost team in the state after all my previous trips (other than North Carolina) had taken me north.

The series appeared in the paper I was working for at the time, and while some of the headlines on the columns were a little to heavy on the puns for my tastes, the one used for the Atlantic City column now seems rather apt: “Traveling to Atlantic City for baseball is worth the gamble.” Even though the team didn’t make it in the end, I think it was worth the gamble. Atlantic City, once a more family-friendly resort, is now an adult playground, the place for bachelor parties and senior-citizen day trips by the busload. The baseball team provided an option that allowed the kids to come along.

From 1998-2006, the Surf played in the Atlantic League, winning the circuit’s inaugural championship. In 2007, they moved to the Can-Am League, in part because the shorter schedule — which runs from Memorial Day to Labor Day — would better fit the tourist season in A.C. (and would cut operating costs). Despite increased attendance and a playoff appearance in 2007 and Cecil Fielder managing the team in 2008, the organization ceased operations in March 2009, just two months before the start of the Can-Am season.

Perhaps baseball can’t last in Atlantic City, despite overwhelming support for other clubs across the Garden State. Or maybe independent baseball was the problem. Unfortunately, the unaffiliated ranks are likely the only option for another go at it in the Jersey Shore’s southern capital. Though I can’t find a reliable source, I would presume that Atlantic City lies within the Phillies’ territorial rights, so they would have to approve any affiliated team that moved into the region. The best fits among the affiliated ranks would be the South Atlantic League, with the BlueClaws as a rival, or the Eastern League, of which the Trenton Thunder are a part. But the Phillies already have affiliates in those leagues, in Lakewood itself and Reading, Pa., respectively, and they’re not likely to change.

So Atlantic City’s Sandcastle will likely continue to decay until the economy improves and some enterprising developer buys the ballpark and the land and turns it into a strip mall or go-cart track or some other attraction. And I’ll have just that one night at the yard and the photos in the slideshow below, presented with the melodramatic crooning of Ol’ Blue Eyes. A bit cheesy, yes, but it feels appropriate this time. Or you can just view the photos here.