One hundred years ago today — Tuesday, Sept. 26, 1911 — the Boston Rustlers arrived at Chicago’s West Side Grounds for a getaway day doubleheader against the Cubs. It would be the 11th and 12th games in the last nine days on the Rustlers’ current road trip, one that would last another 12 games and 13 days through the end of the season.

It was the final pair of games scheduled between two also-rans in the National League. The Cubs (84-57) were in the last days of a pennant race, in second place behind the Giants, 7 1/2 games out with 12 to play. The Rustlers, on the other hand, were the worst team in baseball, 54 games out of first place with a 36-102 record and a .261 winning percentage — well behind their pythagorian mark of .316 based on their 622 runs scored (12th out of 16 teams) and 948 allowed (last, 188 more than any other team had given up).

The home team sent a 28-year-old right-hander out of the University of Notre Dame, Ed Reulbach, to the mound in the first game. The visitors countered with a 22-year-old southpaw from the same school, Billy Burke. It is, I am pretty certain, the last time two former Irish hurlers squared off on a Major League mound.

And it was the last game of Burke’s career. At least at the highest level — he’d pitch two more years in the International League before giving up the game for good.

William Ignatius Burke was born on July 11, 1889, in Clinton, Mass., a town incorporated 39 years earlier and named (allegedly) for the DeWitt Clinton Hotel in New York for the simple reason that the town’s founders were fond of the place. Situated near the Nashua River 13 miles northeast of Worcester, Clinton became an industrial mill town, which in turn attracted the railroads. The building of the Wachusett Dam from 1897-1905 formed the Wachusett Reservoir, which was filled by 1908 and displaced the residents of several towns in the valley that were now under water, including parts of Clinton. While some towns were relocated, Clinton’s local ballfield remained in place. Now known as Fuller Field, it is recognized as the world’s oldest baseball diamond still in use in its original location and orientation. It’s possible that a young Billy Burke first picked up the game on these basepaths in Clinton. From central Massachusetts, he made his way to St. Charles College and Seton Hall University before landing at Notre Dame in 1909. In one season on campus, he threw five shutouts and compiled a scoreless streak of more than 42 innings. But a year later, not yet 21 years old, Burke found himself vying for a spot with the National League’s Boston Doves. It seems his collegiate career was cut short when the Notre Dame administration discovered that he had been playing semi-pro ball under an assumed name — either “Connolly” or “Conway” — for two summers in the New England League. Perhaps authorities as St. Charles and/or Seton Hall also made the same discoveries.

Inconsistencies in spelling — not to mention Burke’s attempts at disguise — make it difficult to pin down a definitive timeline, but archives of Sporting Life show a Connely/Connolly pitching for New Bedford in July 1908 and Lynn on Aug. 4 of that year. Ten days later, a box score shows that Conway came on in relief for Lynn. Conway often came on in relief — perhaps Burke went so far as to be known as Connolly when he started games and Conway when he didn’t. Or maybe he found Conway put up better statistics and decided to stick with that name.

On Sept. 11, 1909, Sporting Life reported that Boston’s National League team had drafted Conway from the Lynn club, along with Moran from Providence, Cooney from Haverhill and Wolfgang from Albany. The following month, the paper provided the briefest of scouting reports: “Cooney, the youngester secured from Haverhill, looks as if he had in him the makings of a mighty good player, and Conway, the Lynn kid, also looks good.” “Cooney” looks to have been Bill Cooney — playing under his own name in the New England League — an outfielder, shortstop and sometimes pitcher from Boston who played at Princeton, but saw action in just 13 games with the Doves in 1909-10, encompassing his entire Major League career. Manager Fred Lake‘s Doves were a young squad in 1910, averaging 26.5 years of age. Burke seemed to be among the promising prospects that offseason, according to contemporary newspaper reports. “Good things” were expected of the hurler “destined to become an artist” on the “slab roll,” for he had “all the earmarks of a comer.” He even handled the bat fairly well, going 3-for-3 in one exhibition game against the University of Tennessee ballclub, and he appears to have played one inning — the bottom of the eighth — in right field during a game in Brooklyn later in the season.

But when Lake’s club broke camp in April, Burke was shipped off to Montreal in the International League. He wasn’t there long, earning a recall to the Doves and making his debut on April 30, 1910, against Brooklyn. In all, he would appear in 19 games for the Boston Nationals that year, starting one of them and mopping up to complete 16 others. He earned one win against no losses, struck out 22 in 64 innings and allowed 68 hits and 29 walks. Twenty-nine earned runs resulted in a 4.08 ERA.

The Doves, though, were horrendous. A 53-100 record in 1910 prompted a change at the helm, and Fred Lake was replaced by Fred Tenney. Burke was reserved by the Boston club over the winter, and a Sporting Life account the following spring cited Tenney in saying that Burke was expected to help the club “a great deal” in 1911. Yet, after a one-inning appearance against Brooklyn in April, Burke was released to Fall River of the New England League and later found himself back in Montreal, where he teamed with fellow Domer Jean Debuc on a formidable staff. Both were chosen by one newspaper as among the best players in the Eastern League that year, and Burke finished with 16 wins. At the end of August, he was recalled to Boston.

Burke’s Major League career lasted all of 21 games, just two of them starts. On Dec. 12, 1911, Burke was released again to Montreal, where he pitched in ’12 and ’13 before giving up the game at 24. Other than a few scattered photographs that have popped up — whether on his Baseball-Reference profile or in some online archives of the Reach or Spaulding guides — there is not much to represent Billy Burke’s professional career. And so I thought I would piece it together for the record, presenting a game log of his 19 appearances for the Boston National League club.

Boston, Sunday, May 15, 1910. Chicago 4, Boston 0: Burke goes four innings to finish off another game, allowing one hit and two walks, striking out two.

Boston, Saturday, June 18, 1910. St. Louis 8, Boston 2 (Game 2): In the longest outing of his career to date, Burke mops up with seven innings of four-hit ball, allowing two runs, walking four and striking out one.

Boston, Monday, July 4, 1910. Philadelphia 6, Boston 5 (Game 2): Another long outing, this one covering 6 2/3, sees Burke allow four runs (though not all earned) on six hits and four walks, with three strikeouts.

St. Louis, Monday, July 11, 1910. Boston 9, St. Louis 6: It’s unclear from the box score how many innings Burke pitches, but he allows one walk and a strikeout.

Boston, Saturday, Aug. 6, 1910. Pittsburgh 10, Boston 2: The Pirates collect a run on three hits, striking out once, as Burke pitches the ninth. 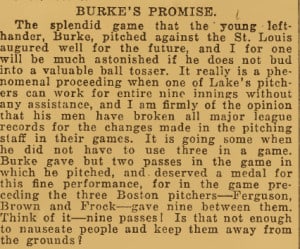 Boston, Monday, Aug. 15, 1910. Boston 8, St. Louis 1 (Game 2): In the second game of a doubleheader, Burke gets his first start — and finishes it, too. The Cardinals manage seven hits but just a single run, walking twice and striking out four times. It is, by far, the best outing in Burke’s career and prompts praise in Sporting Life from Boston correspondent J.C. Morse.

Chicago, Monday, Aug. 22, 1910. Chicago 7, Boston 0: Back to the bullpen, Burke pitches six innings in relief, allowing three runs on seven hits and a walk, striking out one.

New York, Saturday, Sept. 10, 1910. New York 6, Boston 1 (Game 1): Some redemption as Burke finishes off the game with four innings of three-hit, one-run ball, walking three and striking out none.

Boston, Thursday, Sept. 29, 1910. Chicago 8, Boston 3: Not only does this late-season outing represent the first time Burke pitches on consecutive days, but it’s also the first time he faces the same opponent in back-to-back outings. This time, the Cubs touch him for three runs on five hits and two walks in three innings. He strikes out one.

Boston, Tuesday, Oct. 4, 1910. New York 17, Boston 9: In his final appearance of the season (though not Boston’s last game on the schedule), Burke comes on in the sixth to finish out the game with 3 2/3 innings, giving up four runs on nine hits and three walks, striking out two.

Boston, Thursday, April 13, 1911. Brooklyn 7, Boston 2: A new season and a new nickname bestowed upon the Boston club — the Rustlers — but the same results for Burke. He finishes the second game of the year with an inning on the mound, allowing two runs on three hits while walking one and striking out no one. After this, he is shipped out until the end of August.

Chicago, Tuesday, Sept. 26, 1911. Chicago 10, Boston 2 (Game 1): Burke makes just the second start of his career, facing off against a fellow Notre Dame man in Ed Reulbach, and is knocked around for five runs on five hits and four walks in just 2 1/3 innings. He strikes out one batter in what would prove to be his final Major League outing.

Boston went a combined 97-207 (.319) in the two years Burke appeared in a game for the club, so it’s not too surprising that of his 21 career games, the team was 2-19 (.095) — though the gap between the two winning percentages is much wider. But based on how Burke was used, it seems he was thought of as little more than a mop-up reliever in an era when relievers were nothing more than failed starters. Some newspaper reports may have spoken highly of Burke’s potential, but either he never realized it, or his managers saw his ability differently. 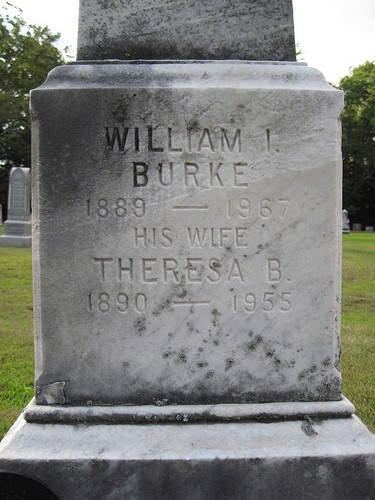 Billy Burke died on Feb. 8, 1967, in Worcester, having worked for the city’s traffic bureau, according to a brief obituary in The Sporting News. He is buried in St. John’s Cemetery in Lancaster, Mass., near his hometown of Clinton.

With no tobacco cards made or photographs available to purchase for my collection, I went to visit Billy in Lancaster. My wife and I stopped off at the cemetery last month on our way up to Maine, finding Burke’s name engraved on the base of an obelisk topped with a cross in a section near the treeline in the back. After spending some time there on a warm but breezy New England summer evening, we found a tavern in town for dinner. Pennants hanging from the ceiling, with Notre Dame among them, and we wondered the local boy working down in Worcester who once pitched for Boston had ever ducked in for a drink. 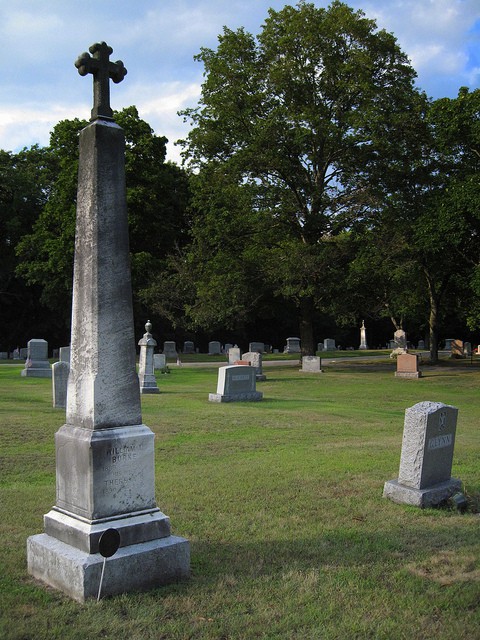 « Next year’s stamps, all together
Carp-e diem! What you missed if you missed last night »