Last week, I wrote about two autographs I obtained at a card show last weekend after reading about the appearances at Paul’s Random Stuff, the first post of Enabler Week. This is the second.

With Notre Dame and Army set to play the first football game in Yankee Stadium ’09 — their first meeting in the Bronx since 1969 — I decided today is as good a day as any to reveal my new endeavor. Tonight, 22 Irish starters and several reserves will join the likes of Brad Lidge, Carl Yastrzemski and George Cutshaw: Those who have played in the Bronx. Sure, none of this year’s Notre Dame football players are baseball prospects, but it’s enough of a tie-in for me.

I’ve been following Kevin’s The Great 1965 Topps Project, in which he’s attempting to collect that entire set strictly through trades. A few weeks ago, he posted card No. 394, Senators pitcher Jim Hannan. I’d never heard of him, but the first line in Kevin’s post drew my attention and an idea was born: “Jim hailed from Jersey City, NJ and attended the University of Notre Dame before signing with the Red Sox in 1961.”

Notre Dame. I’d never heard of Hannan, but it’s not like I had an encyclopedic knowledge of the 70 Domers who went on to the big leagues. I knew of Cap Anson, Yastrzemski and those who made the jump in the past 20 years: Craig Counsell, Lidge, Aaron Heilman and Jeff Samardzija among them.

So in an effort to expand my knowledge of Notre Dame’s baseball alumni, I decided to launch my own project along the lines of the 1965 Topps Project: Collect something — ideally a baseball card, photo or autograph — that represents each former Notre Dame player’s time in the Major Leagues. But there’s one problem: at least 50 of the 77* players debuted before 1950, and so far, it looks like there are 21 for whom I may not be able to find a card, photo or (reasonably priced) autograph. I have some ideas, but I’ll worry about those 21 after I’ve acquired (or at least targeted) the other 49.

[*Update, 12/8/10: Baseball-Reference.com only lists 70 MLB players has having come from Notre Dame, but after checking with Notre Dame’s 2010 baseball media guide, it appears that seven players do not have Notre Dame listed on B-R.com. I’m going with the ND list and will e-mail Baseball-Reference about the seven missing players.] 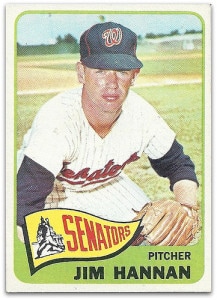 To acknowledge the genesis of this project, I’m leading off with the same 1965 Jim Hannan card that sparked this endeavor. I picked it up on Saturday at the card show in Secaucus, specifically targeting that card to represent Hannan because it’s what led me to this plan. I have to say, it was kind of fun to wander through the show looking for a dealer with enough of a stock of older cards. I went to the National Collectors’ Convention in Baltimore in August without any specific goals in mind, and while I had fun and picked up some unexpected photos, I was overwhelmed and probably would’ve gotten more out of it with a few targets to fulfill.
Anyway, back in Secaucus, I found a dealer with albums full of old Topps sets. He had an album of 1965 Topps at the front of his table, and knowing Hannan’s card number, I flipped right to it and felt a small burst of excitement upon seeing that the sleeve between cards 393 and 395 was not vacant. This particular dealer turned out to be my favorite one at the show; I bought two other Notre Dame alums from him. 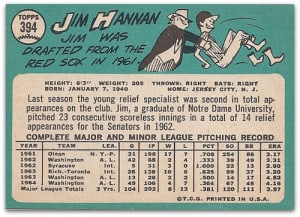 One thing in particular with this card and a few others is the phrasing “Notre Dame University.” At first, I presumed this was simply a slight inaccuracy on the part of Topps and whoever writes these blurbs for the backs of the cards. But after seeing it on card after card, I began to think that maybe it wasn’t a mistake. And then, in perusing the pages available online from Notre Dame Baseball Greats: From Anson to Yaz, I noticed the sweater of Willie McGill in the lower left of the photo on page 20 (see below): “NDU” stretches across the chest. So it seems that for some time, it was more likely known as “Notre Dame University.”
As of this writing, I have 26 of the 70 “pro Domers” covered in my collection. I’ll post one or two a week until I’ve exhausted those that I have and we’ll see who’s left and see what I can do about representing the missing pieces.
« Making sense of minor names
Homers for the hometown »