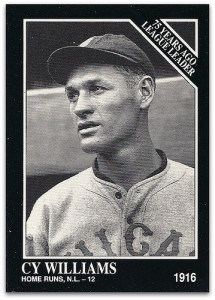 Fred Williams bears the names of two of baseball’s greatest players. The nickname he was known by, Cy — as in “Cyclone” — naturally sparks thoughts of the winningest pitcher in Major League history. And the surname is shared with the self-described “greatest hitter who ever lived,” Ted Williams. But Cy Williams made a name for himself as a pretty decent power hitter and speedy outfielder during a 19-year career with the Cubs and Phillies. He was said to be the fastest player in the game and such an athletic talent that, in addition to serving as the backup left end on the football team (Knute Rockne was the reserve on the right side), he apparently passed up a chance at the 1912 Olympics as a hurdler and broad jumper.

Williams’ baseball career worked out just fine. Signing with the Cubs in 1912, he became the first slugger in the Senior Circuit to reach 200 home runs and went into his final season, 1929, as the National League’s career leader, with 246. He hit just five in his final season, and during that campaign, Rogers Hornsby blew past him, taking the lead in June with the 250th of his career in a 39-homer season, which he finished with 277. Williams hit 202 home runs from 1920-30, a total surpassed only by Hornsby’s 252 and Babe Ruth‘s, um, 516.

Williams went straight from Notre Dame to the Cubs, playing 28 games and batting just .242 with one RBI in his rookie season. He spent five years in Chicago, first playing in the West Side Grounds and then moving to the new Weeghman Park in the years before it was known as Cubs Park (starting in 1920) and then Wrigley Field (beginning in 1926). In 1915, his first full season, he slugged 13 home runs to finish second in the league. A year later, his 12 round-trippers would be good for the Major League lead.

Williams was dealt to the Phillies before the 1918 season, and in 1920 started a run of nine straight seasons of double-digit homers, including NL-leading totals of 15 in 1920, 41 (tied for the MLB best with Ruth) in ’23 and 30 in ’27. The spike in power came as the Dead Ball Era ended and Williams got comfortable with the Baker Bowl’s dimensions: 300 feet to right-center (with a 40-foot fence) and 272 down the right-field line (with a 60-foot fence and net). There’s no need to bother with other dimensions of the Phils’ home field, because Williams was known as such a pull hitter that, according to his SABR bio, opposing managers positioned their fielders on the right side of the diamond, employing what became known as the “Williams shift” — for Ted Williams — two decades before it was used on the Splendid Splinter.

After his retirement in 1930, Williams got his only minor league experience by serving as the player-manager for the Richmond Byrds in the Eastern League for just one season. He then retired from the game, returning to his dairy farm in his native Wisconsin and beginning the second phase of his life as an architect and running a construction company.

Cards for the earliest players are hard to come by — at least on a budget. While there are a few contemporary cards available from the 1920s, the prices tend to be anywhere from $30 to $70. Some PSA graded autographs go for hundreds of dollars. So while I would’ve preferred something more first-hand, this 1991 Conlon card fits my needs, showing Williams in his Cubs uniform. Works for me.
« Talk of a new tenant in Sussex
Just whose Bears are these, anyway? »