On Main St. in this town, between the post office and the library, John F. Kennedy still walks barefoot through the sand. A bronze statue of the 35th President, in khakis and a polo shirt with the logo of the Hyannisport Club, stands outside the entrance to the JFK Museum in the hamlet that might be more of a hometown to the Kennedy clan than Boston.

The modest museum features about four rooms dedicated to JFK and his family’s group of summer homes a few miles away. Their story is told mostly in photographs, with a few videos playing on a loop in one room and a case of campaign ephemera marking the 1960 election — which Kennedy monitored from his Hyannisport home before accepting the nomination at the Hyannis Armory. Two sections of the museum are dedicated to Ted Kennedy and JFK Jr., who, one display explains, would visit the museum unannounced and stroll through his family’s history.

After our visit to Camelot, my wife and I stepped into the elevator and descended to the basement. The doors opened on a bright-green Astroturf carpet, white baselines stretching out in front of us and to the right. Down here, much like many sports fans’ basements, is a collection of artifacts, memorabilia and stories marking the long history of baseball on Cape Cod. It’s the Cape Cod Baseball League Hall of Fame, something that I didn’t know existed until a few months ago. (And an idea that has only been around for the last decade.)

To me, it’s the perfect layout. The Cape League is simple and classic. It’s baseball played by college kids — the best college kids each year — using wood bats and living with host families in a summer paradise. I found it fitting that its Hall of Fame resides in a refurbished, well-lit basement, a basic location that was set up well. Each of the league’s 10 current teams are represented, as are towns and clubs that used to play organized games on the Cape, whether or not they were part of what’s now known as the Cape Cod Baseball League.

There’s not much more to be said, so I’ll just get to the photos. 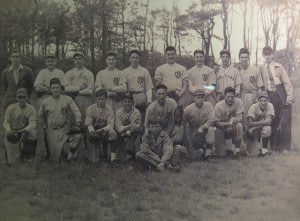 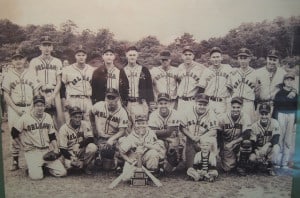 These two early photos show teams from Orleans. The first features several different uniform styles; the second one appears to have just two — but note the two guys in jackets with Red Sox logos on them. It seems Orleans wasn’t always home to Cardinals. Both appear to be photos of Orleans Athletic Club teams, based on the “A.C.” on several jersey sleeves. (If there’s one complaint I had about the displays is that quite a lot of artifacts — particularly photos like these — were not dated, or even labeled. A simple marker saying “circa 1930s” or “date unknown” would’ve at least told us that the date has been lost to history and not left it up to us to guess.) 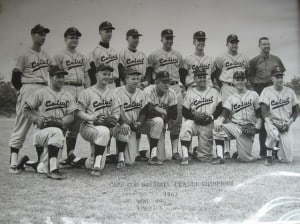 Here’s a 1963 Cotuit team that went 39-5 in winning the league championship. 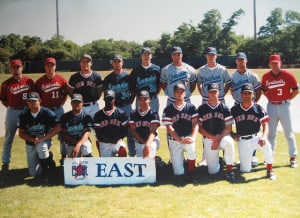 Once again, foiled by the lack of a year. My best guess is that this is a 1990s East All-Star team. They really should think about including a year with the banner. 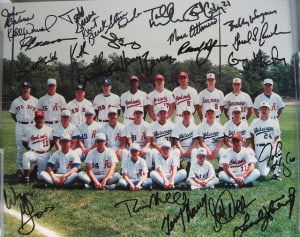 This one is easy — the 1992 East All-Star team. Note Billy Wagner’s signature in the top right. He’s No. 36, third from the right in the second row. He was named the East MVP after striking out the side in his one inning. The West won, 3-1. 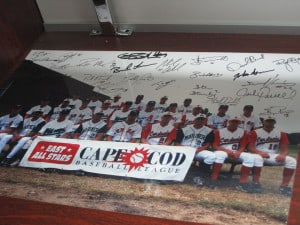 As best I can tell, these are the 2005 East All-Stars — so long as that’s Daniel Bard’s signature along the top. The interesting thing about the autograph’s place on this photo is that Bard, playing for the Wareham Gatemen, would have been on the West All-Star squad. 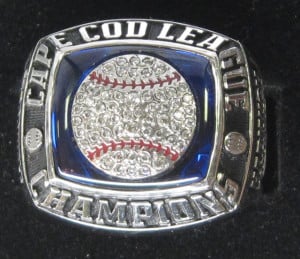 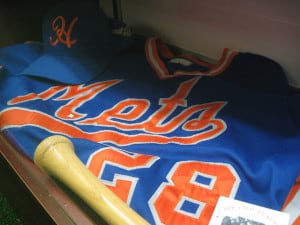 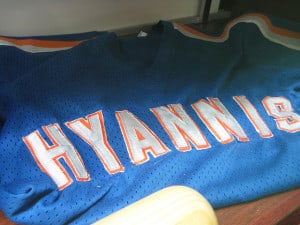 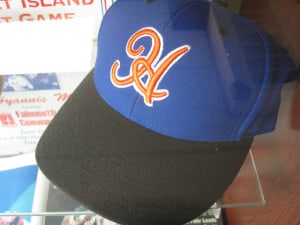 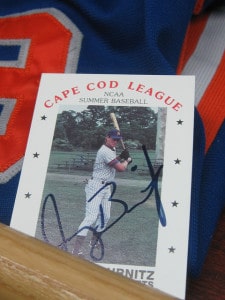 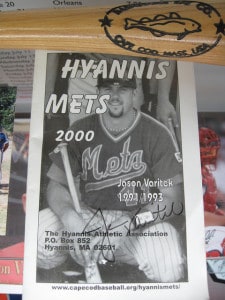 Some highlights of the Hyannis Mets display. I like the lack of black (naturally) in all but the one hybrid cap. I think the No. 28 jersey might be Jeromy Burnitz’s, because his baseball card is set on top of it. And the photo of Varitek on the 2000 Hyannis program might be from his 1993 stint, because he signed my stat sheet in ’91 with “#45” after his name (though that may have indicated his college jersey number). 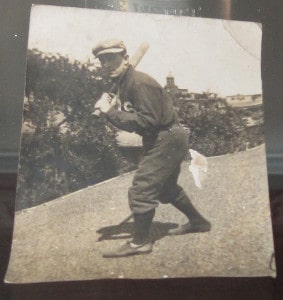 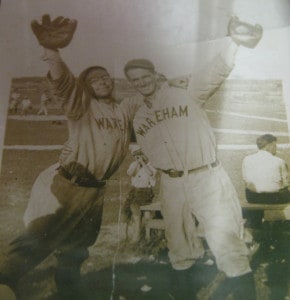 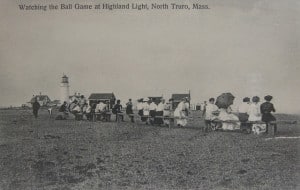 Some old and unlabeled photos. Not sure which team the player in the first one represented. The second is obviously of a pair of Wareham guys hamming it up. And the third is a postcard — and perhaps my favorite photo in the entire museum, the Kennedys included. I visited Highland Light for the first time back in January and love its history. It’s perched on a bluff overlooking the Atlantic and had to be moved a few hundred yards from the edge in 1996 because erosion endangered it. Also, my dad used to run down the dunes near Highland Light with his brother when they were kids visiting their uncle. 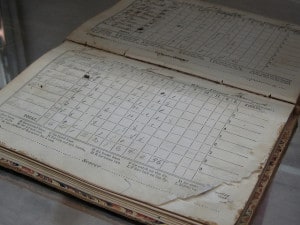 I’m not sure if this old scorebook is the 1867 one mentioned in the press release, but it’s still beautiful. 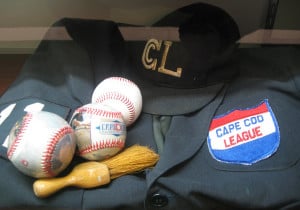 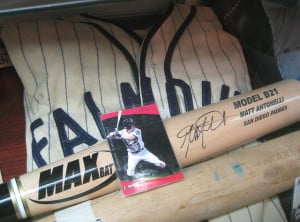 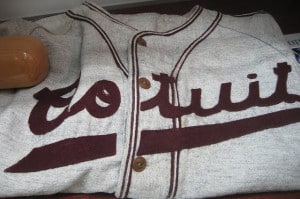 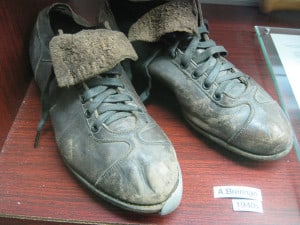 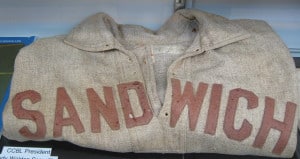 Time for old uniforms! The first is, obviously, an umpire’s cap, jacket and brush. I love the inset C’s on the cap. We then have an old Falmouth jersey. Next is a 1947 Cotuit Kettleers jersey worn by Joe Souza in Cotuit’s first year in the CCBL, followed by spikes worn by “A. Brennan” in the ’40s. Finally, my second favorite thing in the entire museum, a very old jersey from the town of Sandwich. Seriously, who wouldn’t want a jersey with “SANDWICH” emblazoned across the front? (Also hilarious: The police cars in the town say, naturally, “Sandwich Police” on the doors. I like to think they give out tickets for too much mayo.) 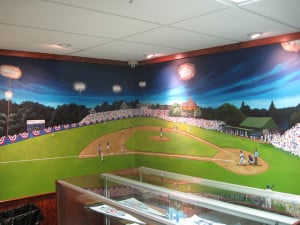 This mural flanks the corner of a movie room featuring old seats from Fenway Park and many of the Hall of Fame classes. The case in the foreground features more modern CCBL pennants and memorabilia on the near side; the opposite side holds hundreds of baseball cards of Cape Cod baseball alumni.

And, finally, a few of the Hall of Famers’ plaques that jumped out at me. 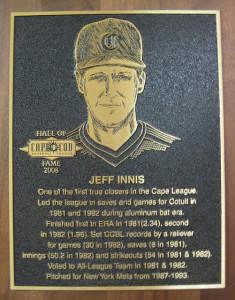 I liked Jeff Innis as a Met. He had that funky sidearm/submarine delivery, and he wanted to become an FBI agent after his playing days. 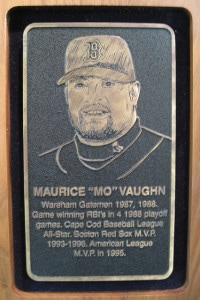 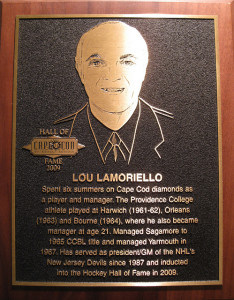 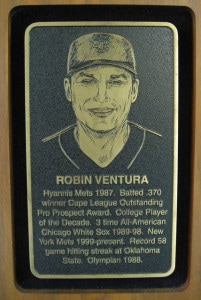 Another personal favorite. I always liked Robin Ventura, both before and after his days with the Mets. His induction in 2001 is the likely reason for his depiction with the Mets rather than the White Sox, with whom he spent most of his career. 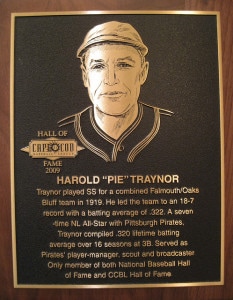 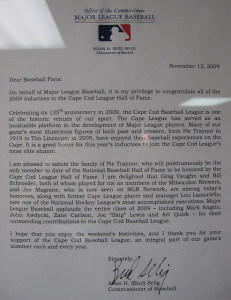 And, lastly, the plaque for the only player in both the Cape Cod and National Baseball Halls of Fame, with a letter from Bud Selig acknowledging that distinction.