Until reading a post over at Mets Police today, I had never realized that the Brooklyn Dodgers “B” logo that appears on caps sold today is different from those generally found in photographs and on authentic, game-worn caps of that era. I left a comment on the post, but my curiosity wasn’t diminished.

The bulk of the post comes from an e-mail sent to Mets Police in which the writer accuses the Dodgers, Mets and New Era of duping consumers into buying what he calls Bakersfield Dodgers caps, not Brooklyn Dodgers caps, citing the photos on baseball cards of Mike Piazza and Pedro Martinez from their Bakersfield days. Head on over to Mets Police to see those cards.

From the scans and an image of a retail cap, it sure looks like the logos are more similar to one another than they are to those on the caps of four Brooklyn Dodgers just below them in the post. Because the Piazza and Pedro Bakersfield card scans render the cap logos rather small, let’s look at the retail cap and the four Brooklyn boys. It sure appears that the retail logo’s B has a straighter line in the letter B and rounder loops as well. The reader says:

Look at any Brooklyn Dodger photo, and you’ll never see a B like the one the LA Dodgers/New Era are peddling. Nor is it similar to the one the Franchise collection is selling, which is a Boston B with a triangle cut out. But it’s a carbon copy of the Bakersfield B. It’s clear from photos of the Brooklyn Dodgers that although there were varients [sic] of their logo, it was never like these. 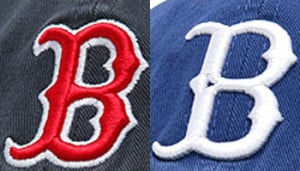 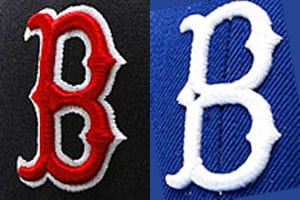 Me again. Now, it’s true that the Franchise Collection cap has a B very similar to Boston’s, something I’d never caught before, even though I have both clubs’ Franchise caps. (Yet I did manage to catch that UCLA’s on-field baseball caps use the Brooklyn Dodgers’ logo — and at a closer approximation to the ’50s design than today’s retail replicas.) Here we have a comparison of the Franchise cap logos (on the left) and those from a current fitted Red Sox cap and a 1932 Dodgers cap (on the right).

There are subtle differences to the point where it’s not literally a Boston B with a triangle cut out, but it’s easy to see where that comparison could be made. And so, using the logos found on Chris Creamer’s site (note that the Brooklyn one has a straight line, not a curved one), I superimposed one over the other. The sizing is a little different (though I tried to get the individual image sizes as close to one another as possible), but they’re definitely close enough to see a similarity. 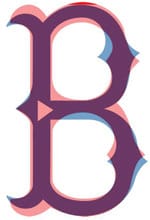 As for those Bakersfield caps? Well, they’re not exactly Boston B replicas, either. This card of Mike Siler, who was in Bakersfield in 1987, shows a cap logo much closer to Brooklyn’s B, with curves in the vertical line and rounder loops. So not even all Bakersfield caps are Bakersfield replicas, as it were.

Now let’s go back in time to compare logos further. Next up are two sets of three cap logos from actual players’ lids. The first set are from three caps I’ve seen in person: Jackie Robinson’s in Cooperstown and Cookie Lavagetto’s and Sandy Koufax’s in a Dodgers display at the Brooklyn Cyclones’ Energy Company Park.

This second set comes from Corbis photos of Frederick Fitzsimmons and Duke Snider and another view of Jackie’s cap in Cooperstown.

Two things stand out in these comparisons. First, the Lavagetto cap (middle B in top series) looks quite similar to the logo produced on replicas today. Second, the three in the second series all show a much more rounded B, to the point that they look like numeral 8’s with embellishments added. That is clearly like nothing we see produced on today’s retail caps.

But not all of the retail caps sport the Boston-like straight-lined B. This shot and this press release both show New Era caps with the curved vertical line and more rounded B.

So what does this all mean? For one thing, I don’t think the Mets or Dodgers have anything to do with how the caps look. That’s up to New Era or whatever company is producing them. I wouldn’t be surprised if the only thing the Major League clubs really look over closely in order to give their approval pre-production are the designs that are worn on the field — uniforms and caps for games and batting practice.

I also suspect that New Era (and any other companies that have licenses to produce them; for the sake of simplicity, let’s understand that “New Era” from here on out means any company that manufactures replica caps for retail sale) is merely working off of a template drawn from just one of several variations of Dodgers logos. Though the finished product might not look quite like what the Dodgers wore in the ’50s, it was probably designed from a logo not unlike what is on Creamer’s page.

Plus, the different eras should be taken into account. Technology, materials and manufacturing methods are much different today than they were in the ’50s — that alone could account for some differences. Today, computerized machines likely play a part in New Era’s production line; back then, it was probably some company employee sitting at a machine to put the B on the Dodgers’ caps.

Looking for some validation to my hunches in this aspect of it, I got this e-mail response from Paul Lukas, the Uni Watch guru: “Back in the day, things just weren’t very standardized. There were LOTS of logo variations. And yes, the materials and manufacturing processes were very different than they are today.”

Could all the manufacturers do a better job of reproducing the Brooklyn B on its retail caps? Sure. It’s done pretty well on some, so why not all? But I think there are many more likely answers to the differences in 1950s Brooklyn caps and today’s retail replicas before we get to a conspiracy on the part of any teams or New Era to hoodwink the fans.
« Those pesky Skeeters are back
Jamie Moyer HAS played a long time »