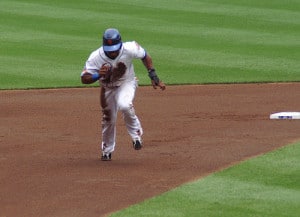 We don’t have a Dave & Buster’s in northern New Jersey, there’s no chance of me ever setting foot in the one in Times Square, and I’m not sure if I’ve ever been to one. But regardless of all that, their “Little Fun” commercial is kind of creepy. Maybe it’s the fact that it’s a first-date kind of “plot line” and there are these creepy pint-sized doppelgangers scurrying around.

Despite his 6-foot-1 height, Jose Reyes is the Mets’ Little Fun. And make no mistake: They need him back, healthy, 100 percent. Before last season, I declared in the office that Reyes could hit 20 triples at Citi Field. I still say that’s possible if he plays a full season in 2010.

I’m always amazed when I hear or read Mets fans calling for a trade of Reyes or the owners in my fantasy league — Phillies fans and Yankees fans, they happen to be — say they’re not sure Reyes is a good influence or he needs to grow up. I wouldn’t say he’s a bad influence, but I will concede that he does have moments of immaturity or lapses in judgment. But even All-Stars freeze up at times.

I’d probably put Reyes alongside David Wright as my favorite current Mets. The guy’s a sparkplug, an excitable and exciting jolt of energy and, when healthy, a legitimate threat at the plate, on the bases or in the field with that throwing arm of his. Matt Cerrone at MetsBlog shares my admiration, and it’s these words from him that spurned me to write this post:

I missed watching him play, and found watching the Mets to be a bit less fun without him; and, though the losing probably had a lot to do with that, his energy was clearly missed, not just in the stands, but also in the dugout.

If Reyes is ready to go on Opening Day, I expect a bit more from the offense, no matter how it is filled out. Until I see how this season unfurls, I feel the losses of Reyes, Carlos Beltran and Carlos Delgado played a part in Wright’s mere 10 home runs. Taking those guys off the bases allowed pitchers to pitch differently to Wright, and he probably tried to do too much as the last Met standing in 2009, looking for the three-run homer instead of shooting the gaps for an RBI double. That’s a bit of a gut feeling — an educated gut feeling? — based on watching all or significant parts of perhaps 140 games last year, but I’d love to see splits of Wright’s runners-on-base situational stats from 2008 and 2009, with Reyes or Reyes and Beltran, etc., on the pond.

Analysts say it starts at the top, and for the Mets in 2010, it may end there as well.