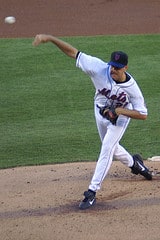 The right-shoulder injury sustained by Kris Benson leaves the Orioles in a lurch, because the team felt rather comfortable up to this point with its pitching situation. Baltimore went out and spent more than $40 million to bolster the bullpen and expected Benson to anchor an otherwise young but up-and-coming rotation. Left-hander Erik Bedard led the Birds with 33 starts in 2006, Daniel Cabrera brought his ERA down by nearly a run and raised his strikeout-to-walk ratio by almost a full point after the All-Star break, Jaret Wright came over in a trade from the Yankees to add another experienced arm, and Adam Loewen was expected to fill out the final spot and continue his development.

But now the Orioles have to find someone to fill Benson’s slot, and the reports are it will be free agent Steve Trachsel. ESPN.com’s Rumor Central posted on Feb. 2 that Trachsel prefered to stay in the National League, with the Cardinals, Astros and Nationals considering him. Now, suddenly, it appears he’s willing to go to the junior circuit.

The problem — which could be quite amusing, so long as you’re not an Orioles fan — is that if he chooses Baltimore, he chooses the AL East. And he chooses to face lineups — those of the Blue Jays, Red Sox and Yankees — that will be less than forgiving for a pitcher making an adjustment to the designated-hitter-heavy wallops packed by AL batting orders. Look at what Randy Johnson experienced in his two years in the AL, and he didn’t have to face the Yanks.

Both Bedard and Cabrera started a slew of games against that triumverate in 2006, so Trachsel should expect to face them a total of eight or nine times this year. On 11 different occassions, when Bedard went out to the mound for the first inning, he found himself looking at one of those teams in the opposing dugout, facing the Jays five times and the Red Sox four. Cabrera went up against Toronto four times.

I just find it hard to believe that Trachsel would be willing to join Baltimore and face that kind of potential bombardment, when the Cardinals and Astros apparently wanted him to come in and bolster more experienced and starting staffs on teams that have better postseason chances than the Orioles do.

As a Mets fan, I was happy to have Trachsel around for 30 starts in 2006. He was the longest-tenured Met and clearly enjoyed the celebration when the Mets clinched the NL East. But when he struggled in his Game 3 start in the NLCS, hurt his leg and then, apparently, asked out of the game, he lost some respect in the clubhouse, reports have said. It was unlikely he was coming back to the Mets. And considering that he’s now 36 years old and the Mets have younger options in John Maine, Oliver Perez and even Chan Ho Park, I think I’d prefer they take their chances with one of those, even with three out of five starting spots officially unaccounted for.

But man, there could be some fireworks on those days Trachsel toes the rubber against the AL East’s big three.