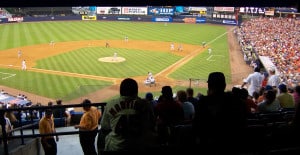 River Road curbside I stand waiting for the 158 New York City bus — sweating uncomfortably, I might add, until this pleasant breeze kicked up — I could count all the drivers heading south who unsafely (and perhaps illegally; I’m not sure what Edgewater’s law is) talk on their cell phones while driving. Holding it, looking at it — a glance at the screen as he pulls up to and then through the intersection. I mean, if you’re going to look, don’t do it at an intersection on a four-lane road. Here I stand, easily annoyed at how much more our society becomes me-centered everyday. But the bus arrives at 5:41, pretty much on time and so articly, refreshingly frigid.

This is my third game in nine days, my second in three, my 48th at Shea overall. How do I approach it differently? How do I put a fresh spin on a routine experience? Therein lies the challenge, I believe. Tonight, rather than sitting and scoring (a task that, in this internet age can be done — or adjusted, for accuracy — at home) I decide instead to wander the aisles a little bit, to observe and record the atmosphere, the flavor of Shea on a sweltering July night. I know I’ll arrive late anyway, so most of any scoring would be done online as a result. The challenge, of course, is getting to the city. A 20-minute trip at best (and, truthfully, it’s never that), 30 minutes on average, takes that long just to get to the last stop in New Jersey, at Lincoln Harbor. Then it takes us another 20 to get through the Lincoln Tunnel to New York, where we head all the way to 31st Street to get onto 10th Avenue to go up to the Port Authority at 40th. All because of traffic. Nearly an hour after I boarded, we’re in the left lane at 37th and 10th and I’m wondering how we’ll move to the right across three lanes of traffic in three blocks. Turns out we’ll do it in the span of one block — simply by brute force, mere intimidation. When does the 40-ton bus change lanes? Whenever it wants to!

Off the bus at 6:45, I’m in luck with no line at Auntie Anne’s, so for $3.70 I have a pretzel and a lemonade. At Shea, that would cost me about $6.50 — if not more — and with three ballparks in three days, I’m determined to spend no money inside Shea Stadium tonight. Only the good fortune of no line allows me this stop and my timing turns out perfectly. As I descend the steps inside the subway, the E train has just come to a stop, only the slower moving pokes in front of me prevent me from boarding as the doors close. I stand there a second and the doors do indeed open again, and I step aboard with a satisfied sigh. The pretzel is gone before we’ve made four stops and left Manhattan. 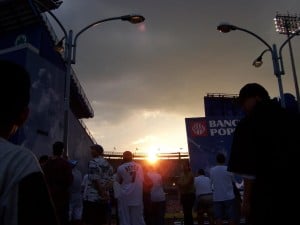 How to approach this game differently was taken care of by the Mets: a sellout on Merengue Night, an atmosphere off the train and on the ramp like a holiday, a postseason game, an event. The platform railing was packed with people watching from afar (and for the low, low cost of a $2 subway fare). The gates into the ballpark were linked by one extended, meandering, pulsating throng of people wrapping the stadium. It is a late-arriving crowd, the top of the second inning underway inside and lines still forming to pass through the checkpoints and get inside. Mets employees are checking tickets and directing people to their assigned gates to cut down on bottlenecks, not to mention at the top of escalators and ramps, preventing people from exiting onto the loge level if their tickets are for the mezzanine or upper deck.

I couldn’t be happier with my seat in the back row of the loge. On Wednesday, when I bought the ticket, I asked for the cheapest, upper reserved. The ticket agent told me she had the rear of the loge for the same price, the trade-off being the low overhang which cuts off my field of view a few feet above the outfield wall. It’s not new to me, so I didn’t mind taking it for the closer view of the rest of the action. The bonus to this panoramic home-plate view is the constant breeze, natural air conditioning so comfortable, this game might as well be played in a dome. Looking down as I write in my notebook, I hear the crack of Jeff Kent’s bat and the resulting, “Ooooh” of the crowd means I don’t even have to look up. But I do, and I see Cliff Floyd trotting toward the wall in left field for a token look as the ball sails deep into the Dodgers bullpen. 1-0 Los Angeles.

Up the aisle walks a kid — maybe 12, 13 years old — in a Yankee shirt. It’s one of my biggest pet peeves at the ballpark, the wearing of a team when it’s not on the field. With New York being a two-team city, it’s to be expected, whereas in Seattle or St. Louis, it might not be so commonplace. But this kid is no hanger-on, no bandwagon jumper, for when he turns around, the back reads, “GEHRIG 4.” That’s respect. 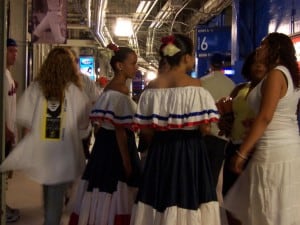 As I walk the ballpark — or, more accurately, the loge level — the Dominican flags are too many to count. At least six full-sized ones hang from overhangs and railings out in the stands while dozens of a more manageable size are carried, tucked into a waistband or incorporated into a shirt or a hat. For every red, white and blue Dominican flag, there are probably two jerseys or t-shirts with a No. 45 on the back and the name Martinez above it. The electricity that could have been produced had the Mets not altered the rotation and kept Pedro on schedule to pitch tonight …

By the fifth inning, it’s 6-0 Dodgers. Victor Zambrano just didn’t have it tonight. At least it’s in support of Jeff Weaver, I think, wondering how much that helps, having a pitcher on my struggling fantasy team pitch well at the expense of my favorite major league franchise. Earlier, out in section 31, I heard someone echo my mother’s oft-repeated thought. Citing the Mets’ 12-0 victory on Thursday, he said they should’ve “saved” some runs for tonight. Well, no, not really, I think. Hitting is contagious. Get into a groove and keep it going for a few games. That’s what I say. 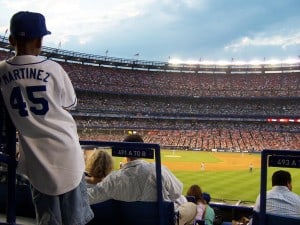 The loge level is where you want to be for a big game, or for a sellout. When there’s a raucous crowd, the overhang amplifies the cheers. You feel like you’re in a club, it’s so loud. That observation is brought to you by Doug Mientkiewicz and his 10th home run of the season, cutting the score to 6-2 in the bottom of the fifth.

Another thought comes to me an inning later, set up by singles from Jose Reyes and Mike Cameron. Carlos Beltran comes to the plate and turns on a Jeff Weaver offering to launch a home run into the small spit of loge seats that extend into fair territory — way out in section 31. My section behind the plate is eccstatic, the music pumping and Reyes and Cameron exchanging a unique bumping of fists and elbows at home as they await Beltran’s arrival. I think back a week to the home run derby in Detroit and to last year’s in Houston, where I watched from a seat far out in right-center field, where no balls could reach me (not that I wanted it that way, but that’s where they sat the less important media). The Mets haven’t asked to host 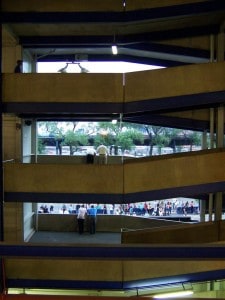 an All-Star Game in nearly 30 years, but how could they have it? Shea hardly has any outfield bleachers, so all of those home-run balls would bounce off the scoreboard or land in the no-man’s land of scaffolding and player parking instead of being engulfed in a sea of bare arms and outstreched gloves.

Now it’s 6-5, thanks to Beltran, and I decide then that rather than leaving at 9:30 in order to ensure I catch the 10:30 bus back to New Jersey, that I must stick around for this one. There’s a feeling in the air besides the humidity, the feeling that there is more to this comeback. I’m sitting in a sea of strangers, brought here first for our love of the Mets, but my neighbors on this night also come for the love of the music to be played after the game. On this night, we gringos are far in the minority. I don’t want to leave. I want more of a rebound from the Mets, more reasons to slap hands with these momentary friends around me. I can’t bring myself to walk away from this just so I can be home “at a good hour” to pack for the weekend and get off to an early start in the morning.

The seventh inning stretch comes and rather than the standard Lou Monte jingle following “Take Me Out To the Ballgame,” someone in the production room plays to the crowd as the Macarena echoes across Shea. Sadly, those are the last few moments of what had become a block party atmosphere. Los Angeles’ bullpen comes in and closes the door, preventing any further Mets comeback. I stay to the end, leaving only when there are two outs and no one on in the bottom of the ninth. I stand at the top of the ramp to watch the final out before turning and commencing the brisk walk to the elevated tracks to beat the crowds — not onto the train, but those who are moving down, entering the field level after sitting for nine innings in the upper deck. They want to be closer to the show, closer to the concert by Fernando Villalona, Sergio Vargas and El Jeffrey. 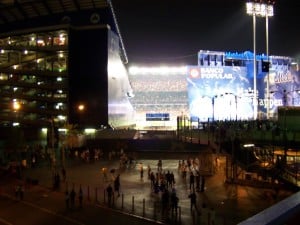 I walk to the front end of the platform, out from under the overhang and beyond the wall that blocks any view of the stadium. The ramps are packed. The sidewalks around the outside are bustling. It’s a festive scene, one that you wouldn’t expect following a loss, but this is one of those games where you get the feeling the outcome wasn’t the most important thing. Coming to this game tonight was about community, about a night out with friends, whether you planned ahead and came with them, or ran into them as you made your way to your seats — a phenomenon I witnessed twice tonight. The Mets have always been New York’s second team, the one that came along later after the Yankees had existed in the city for more than half a century. The Mets were immigrants to the New York baseball world, and these nine years of heritage nights — of which Merengue Night is one — simply seem appropriate for this ballpark, for Queens. A ballgame at Shea Stadium, to me, feels like walking down a city block where everyone knows their neighbors, where they sit on the stoop and send greetings out to the passersby on the sidewalk or to a window three doors down and two flights up. And on Merengue Night, it just becomes a 55,000-person block party.

« Baseball and the road
Day 2: At least Washington’s first in something »