Last week at Uni Watch, a reader speculated that Joe Smith — if that’s his real name — had worn 33 distinct uniforms in his NBA career, which now includes a record-tying 12 franchises for which he’s played. Paul Lukas declared those 33 different styles to be an NBA record and then wondered who might hold the same distinction in other leagues. I took that as a challenge.

Paul speculated that Mike Morgan, the pitcher who shares the MLB record with 12 teams in his career, or Kenny Lofton, who donned 11 clubs’ colors, might be baseball’s most uniformly decorated player. Not counting batting practice/Spring Training or minor league uniforms, I found 33 different uniforms worn by Lofton (including one documented throwback design) in 17 seasons and 39 by Morgan in his 22 years. (In his three seasons with the Diamondbacks, 2000-02, Morgan wore at least eight different designs. There was the 2000 home/road uniform, the new home/road unis in 2001-02 and various alternates and variations, like “Arizona” in purple, black and gray and the “A” in sleeved, sleeveless and black. I think that franchise has had more jersey designs in 14 seasons than the Yankees and Red Sox have had, combined, in their existence.) But neither Morgan nor Lofton top MLB’s list.

Matt Stairs blows them both out of the water. Since breaking in with the Expos in 1992, Stairs has equaled Morgan’s record by playing for 12 clubs and is trying to make his 13th this spring in Nationals camp [Update: It occurred to me while shoveling New Jersey’s latest snowfall that Stairs started his career with the Expos/Nationals franchise, so he wouldn’t set a record with his 13th club if he makes the team this spring, but he would still add to his uniform total.] With several uniform design changes, the proliferation of alternate jerseys and the rise in throwback nights, his clubs have sported 46 different jerseys — and there are probably a few (or several) throwbacks that we don’t know about. I’m comfortable giving Stairs the title.

The retro replicas included are basically because I happened upon them while looking for other photos, though the Padres’ 1984 and 1978 designs worn last year were easy to remember. If Stairs makes the Nationals, he’ll have four jerseys to add to his list, because in addition to home and road tops, Washington has red and blue alternates as well. That would bring his known total to an even 50.

So here’s the breakdown. Settle in for a trip down (or up?) the sartorial Stair-way. 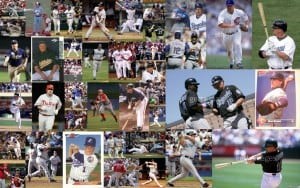