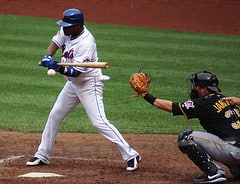 With each passing day, I grow happier knowing that we won’t have to see this anymore — a defensive swing to fight off a pitch in an at-bat that, more often than not, will end in a five-hopper to shortstop.

On weekend in grade school, I was at my friend Phil’s house with some other kids, playing Wiffle ball in the backyard. One of Phil’s neighbors (I think his name was David, but not the Dave I’m still good friends with today) kept checking his swing, even at the fattest pitches — and we weren’t even trying tricky curves and other fun with physics and a plastic white ball with holes in it. The pitcher — Phil’s dad, I believe — was serving up simple lobs. Finally, Mr. Phil asked, “Why do you keep doing that?”

“I’m trying to check my swing,” David said, implying that he was attempting to mimic what he’d seen big league players do, to prove that, if he couldn’t crush a home run like Dave Winfield, he could at least check his swing like him. And that’s the feeling I sometimes got with Luis Castillo — that he was up there just trying to prove he could do what he’d seen other players do. Or maybe that he’d get himself into a two-strike hole just so he could foul off eight pitches before grounding out.

I know that’s not the case, but as he lost his speed, his ability to steal bases at will, his range at second and any semblance of even doubles power (when’s the last time anyone remembers him ripping a ball down either baseline or hitting a line drive over an infielder, not between them; or the last time he split the outfielders for a double?), I lost any pleasure I got from watching him play.

I enjoy watching “tools” guys, speed merchants who, when they get on base, bring the same sense of anticipation that a power hitter like Albert Pujols does when he steps to the plate — there’s a good chance you’re going to see something exciting, like beating a perfect throw from the catcher on a steal of second, then scoring from there ahead of a peg to the plate by Jason Heyward or any other top right-field arm.

But Castillo hadn’t brought any of that in some time. I was fine with bringing him over in 2007, when Jose Valentin no longer cut it and Damion Easley and Ruben Gotay couldn’t fill the hole. But because Castillo had knee issues and speed was always the best part of his game, I didn’t want the Mets to sign him after the season. If they did, I hoped it was only a one-year deal, two at the most. From the moment we heard that it was four years, I labeled it the worst contract on the club, and I think it held that title pretty well, remaining the No. 1 or 2 worst deal to this day.

I suppose there’s a good chance Castillo catches on with another club as a backup, but I hope it’s not a team that comes to Flushing this year, both for Castillo’s sake and Mets fans’, because you know there’s only going to be one response he gets.

« Tale of a Tiger: Princeton’s Bill Clarke
A farewell to Ollie »