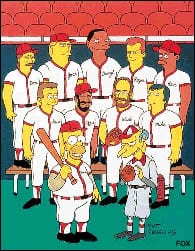 Homer at the Bat

Today I watched “Homer at the Bat,” the episode of The Simpsons in which Mr. Burns hires nine major league players to token jobs at the power plant so that they can play on the company softball team. When Smithers goes out to hired the first of the ringers, his first stop is a baseball card show at which Jose Canseco is signing autographs. “I get $50,000 to play one game?” Canseco asks, sounding excited. “Well, it’s a pay cut, but what the hey, it sounds like fun.”

Looking back on it now — the episode originally aired almost 13 years ago, Feb. 20, 1992 — it’s amazing to see what players were chosen, and the subplots that were explored. For instance, today Canseco is still looking out for Jose, trying to make money however he can. So I thought I’d take a look at the Springfield Nuclear Nine, then and now.

JOSE CANSECO
Then: The 27-year-old was coming off a 44-home run, 122-RBI season with the A’s, his sixth full season. He’d hit 209 homers to that point. The 1992 season: He was traded to Texas in August for Ruben Sierra, Jeff Russell, Bobby Witt and cash. It was a deal that seemed like it could be one of the biggest ever and an exchange of two certain Hall of Famers. Now: I hear he’s got a book out, based loosely on his playing days.

MIKE SCIOSCIA
Then: At the age of 32, Scioscia batted .264 for the ’91 Dodgers in 119 games. He had what would probably be considered his career year in 1990, when he also hit .264, but with 12 homers and 66 RBI, both career highs. He knew how to work a count, though: In each of his 13 big-league seasons, he walked more times than he struck out, despite a career .259 batting average. The 1992 season: It was his last as a player. In 117 games, he hit just .221 with a career-low .286 OBP (.344 lifetime mark nonetheless). He retired with just 68 career HRs. Now: He’s about to enter his sixth season as manager of the Angels, coming off his first division title. The team’s 75th win this season will be his 500th. Show quotation: [Explaining why he actually enjoys working in the power plant.] “It’s such a relief from the pressures of playing big-league ball. I mean, there, you make any kind of mistake, and — BOOM! — the press is all over you.” And now he’s a manager. Go figure.

OZZIE SMITH
Then: At 37, The Wizard of Oz had just come off his third straight season with exactly 50 RBI. The 1992 season: He hit .295 and stole 43 bases, but would have only one more season with 500 at bats before retiring in after the ’96 campaign. Now: He may be the last player to reach the Hall of Fame for his defense and solid consistency moreso than his offensive numbers. Show moment: During practice, Mr. Burns takes the bat from Oz to show him how to bunt. The pitch comes in, and Mr. Burns is knocked to the backstop by the force of the ball hitting the bat.

DON MATTINGLY
Then: He played 152 games for the Yankees at 30, but hit just 14 homers combined in 1990 and ’91. The 1992 season: He overcame his back problems enough to hit 14 homers in ’92 and 17 in ’93, with 86 RBI in each. Now: He’s in Tampa, about to start his second season as the Yankees’ hitting coach. Show quotation: “I still like him better than Steinbrenner.” Airing six months after George Steinbrenner criticized Mattingly for wearing his hair too long (and had him benched for one game because he didn’t cut it), Mr. Burns insists Donnie Baseball shave his sideburns. Mattingly doesn’t see the problem (he has no sideburns) and ends up shaving the sides of his head up and over the top. Burns still isn’t satisfied and kicks him off the team, prompting the comment.

STEVE SAX
Then: “Saxie” hit .304 with a career-high 10 homers and 56 RBI in ’91 for the Yankees. He also stole 31 bases at 31. The 1992 season: In the first of two seasons with the White Sox, his average plummeted to .236, though he still stole 30. He played just 57 games in ’93 and seven in ’94. Now: Sax appeared to be the leading candidate to land the color commentator’s role for TV broadcasts of about 50 Dodgers road games (those for which Vin Scully does not make the trip), but the team hired Steve Lyons instead. Show quotation: “But there’s hundreds of unsolved murders in New York City.” The police pull him over as he’s driving through Springfield and harass him because he’s from NYC.

ROGER CLEMENS
Then: The Rocket, 29, went 18-10 with 13 complete games (four shutouts) for the Red Sox, striking out 241 batters. The 1992 season: Clemens was 18-11 with 11 complete games (five shutouts) and 208 Ks. Now: He’s signed on for one last, final last season with the Astros. Show moment: The Rocket’s grounded from the softball game because the hypnotist brought in to convince the team (ringers and true employees alike) that they were outstanding athletes has made Clemens think he’s a chicken. He walks around the field clucking. Eight years later, he’d throw a bat at Mike Piazza and then claim he “thought it was the ball.”

WADE BOGGS
Then: The 33-year-old third baseman hit .332 for the Sox in ’91. The 1992 season: His worst average, by far: .259. Not great for a contract year. In ’93, he was in the Bronx. Now: All the money he earned in the bigs bought him a new full head of hair. And, he’s in the Hall of Fame. Show quotation: “Pitt the Elder!” At Moe’s, in a debate with Barney over who was England’s greatest prime minister, Boggs gets punched out for disagreeing with Barney.

KEN GRIFFEY JR.
Then: He played three seasons before turning 22 and reached 100 RBI (exactly) for the first time in ’91, hitting .327. The 1992 season: Continuing his steady rise, he batted .308 with 27 HR and 103 RBI. Now: After the difficult offseason of 1999-2000, when he forced a trade to his hometown Reds, this is the fourth straight spring folks in Cincinnati are beginning sentences with “If Griffey stays healthy …” Show quotation: When Mr. Burns forces everyone to drink Brain & Nerve Tonic to “promote robust health,” despite causing gigantism in rare cases, Griffey gets hooked on the sauce and develops a huge head. Since then, he’s missed at least 20 games in eight of 13 seasons.

DARRYL STRAWBERRY
Then: His first season with the Dodgers produced 28 home runs and 99 RBI at the age of 29. The 1992 season: This is where the signing officially went bust. He played just 43 games and would top 100 only once (1998 with the Yankees) before retiring after the ’99 season. Now: Returning to his roots, Straw will be a spring-training instructor for the Mets in Port St. Lucie. Show moment: As the only ringer who wasn’t kicked off the team or otherwise kept from playing, Strawberry starts the game in place of Homer in right field. Upset that their father isn’t playing, Bart and Lisa start chanting “Daaaa-rryl! Daaaa-rryl!” Marge scolds them, but Lisa explains, “Mom, they’re professional athletes, they’re used to this sort of thing. It rolls right off their back.” Strawberry sheds a tear.