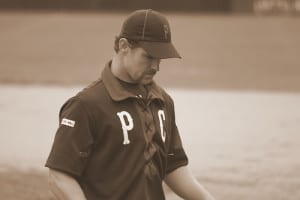 Not much time for a more in-depth post because I’m off to the Mets game today (Johan!) and have to catch my train in less than an hour. [Expanded below.] Yesterday morning I drove up the road to see the Pittsfield Colonials face the New Jersey Jackals at Yogi Berra Stadium mainly to see the Pittsfield uniforms. The former American Defenders of New Hampshire in the Can-Am League moved from one old, historic ballpark to another, taking up residence in Pittsfield, Mass., at Wahconah Park. If nothing else, the uniforms — which harken back to Pittsfield’s long, 100-year baseball history — are a 180-degree improvement.

Off to the Citi. This is going to be an extended run of in-the-ballpark fun, so there should be more posts in the next few days.

I sat in the first row next to the Pittsfield on-deck circle and had a great view of the uniforms. I considered trying to strike up a conversation with one of the hitters, but even though it’s a small independent league, I figured these guys still take their work pretty seriously and might not be open to an extended conversation while preparing to bat.

Among some of the highlights (all included in the gallery below):

Love how the collar flares out as the pitcher delivers.

The pant cuffs have drawstrings — but it would look better if they wore true stirrups.

The long sleeves are a great touch, as is the deep collar and lacing. That’s a team logo on the sleeve. All of the players seemed to be wearing generic blue batting helmets — and not the new, S1000, either. I don’t know if that’s simply a cost-cutting measure or if an order with a Pittsfield logo has yet to come in.

The numbers appear to be felt, which is cool.

All of my Pittsfield-tagged photos are here.

I’m so intrigued by this concept that I may delve into it further in the future. I’d hoped to make a more definitive declaration, but recent unforeseen events that may necessitate auto-buying research have put leisure pursuits on hold.

Created with Admarket’s flickrSLiDR.
« I wasn’t there: Indians-Senators, 1939
Photo Flashback: Meeting the Mets home and away »