I like to look at the All-Star Game as a yearly event, an annual summertime look at the best players in the game that year. I’m not into career achievements or voting for a guy each year just because he’s a perennial starter at his position. Just because a guy like Alex Avila wasn’t a starter before this year and wasn’t known outside of Detroit and AL-only fantasy owners shouldn’t be held against him in voting.

I also lean toward voting for players who have been on the field, guys who have stayed healthy all year. There have been times where a simple 15-day DL stint — on, healed, and off; no setbacks or 20-day absences — can be overlooked, particularly if it came earlier in the season (like April). But if it comes down to two players with similar numbers, or one guy might have the same stats as another if he had only stayed healthy, I’m voting for the guy who did stay healthy. Plus, if a guy’s DL stint was more recent — say June, even into July — I’m probably not going to punch (or click) his name.

The reasons are simple: I want to see the best in the game right now, as in this year, this half-season, facing off on the second Tuesday in July. And if that means a guy at 80 percent not going to the game, I’m OK with that. I’d rather my vote go to a deserving guy who gets to play in the game than for a player named the starter who then backs out of the game because of an injury.

Over the past few years, I’ve tended to wait until the final days before filling out my maximum allotment of 25 ballots (per e-mail address) at MLB.com. As two friends and I were trading e-mails the other day discussing various decisions at certain positions, I wondered if we were treating this like a student leaving his term paper until the final weekend before it’s due. Matt saw it another way, which I then realized was actually the truth: “As for doing this on the last week, I don’t consider that being lazy, I consider it performing due diligence and not succumbing to the herd mentality that pervades at ESPN and other sports news outlets.”

So having taken advantage of the technology and used a full 81 games (for most players) to consider their statistical — and, in some cases, non-statistical, because there are some guys you just want to see play as often as you can — output, here are the quick hits on those I vote for this year. (I’m not going to bother with filling out full team rosters. I may or may not post some thoughts on the actual squads when they’re unveiled on Sunday and offer reserves then.)

A few final notes on the game, rosters, voting, etc.: 1.) I hate that the game counts, always have. It’s an exhibition, and by definition shouldn’t have any bearing on how the yearly champion is determined. 2.) I don’t like being a fan of a game in which utility players are All-Stars. Nothing against Omar Infante as a man, but he’s not an All-Star. The fact that Charlie Manuel felt a need to have a guy who could play so many positions on his team last year in the event it went extra innings pained me as a fan. 3.) I’m a National League guy and don’t care for the designated hitter, but I’m glad they’re using it in every All-Star Game now. If baseball were a DH-less sport, I’d be OK with watching pitchers hit in an exhibition. But really, who needs to see Justin Verlander stand there with a bat on his shoulder against Roy Halladay? Plus, the fact that they’re now bending the rules to allow the DH in National League parks makes it more ridiculous that they’re making this game count for anything. 4.) I’m only considering players on the actual ballot, which as we all know is so rigorously — and somewhat insanely — determined mostly by Opening Day lineups. There are exceptions made (see “Utley, C. – PHI” under National League second base), but not enough.

1B: Adrian Gonzalez. He’s batting 100 points higher than Mark Teixeira, has scored more runs and driven in more. Plus, he can play right field! Now that’s a utility All-Star. 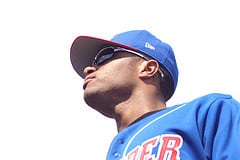 2B: Robinson Cano. He’s got the numbers across the board at the position. Solid all around, where other candidates lag behind Cano in one or two categories, sometimes significantly.

SS: Asdrubal Cabrera. This is where my beliefs on “career All-Stars” come in. Sorry, Jeter, not this year. A couple of weeks ago, Asdrubal was a slam-dunk runaway choice. Some arguments could be made for a few other candidates, Jhonny Peralta among them (but not Jeter), but Asdrubal’s significant advantages in runs and stolen bases lift him over Peralta. 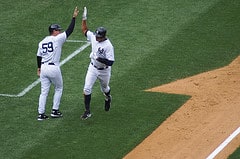 3B: Adrian Beltre. I debated this choice for a while, and I’m still not sure of it. I gave Beltre the edge over Alex Rodriguez because Beltre is a better fielder. Sure, he has a few more errors, but he gets to more balls, has more putouts and assists and has been a part of more double plays. Can’t really go wrong with either, or Kevin Youkilis for that matter.

C: Alex Avila. Really, it’s not even close. Better numbers at the plate, better numbers behind it. Avila’s thrown out 38 percent of would-be base-stealers, catching 22 the last time I looked, second only to Kurt Suzuki‘s 23. And Avila got Jose Reyes today by a solid margin, only the sixth time Reyes has been nabbed this year.

DH: David Ortiz. In a landslide. Whatever, it’s the DH.

OF: Jose Bautista, Curtis Granderson, Jacoby Ellsbury. Bautista and Granderson are no-brainers. Ellsbury was a more deliberated choice. Adam Jones would be worthy, too, especially when you consider his defense.

1B: Prince Fielder. He’s putting up the monster numbers in a contract year that everyone expected to see from Albert Pujols.

2B: Rickie Weeks. Looks like he’s finally put it all together. It’s fun to watch him play. One thing I didn’t realize about him until I saw him up close at Yankee Stadium this week: his upper body is big, especially for a middle infielder. He wears a more tapered jersey than Fielder does, but their upper torsos are more alike than not. If it weren’t Weeks, it’d be Brandon Phillips. And if it weren’t Phillips? Probably Neil Walker. Other than the batting average, he’s got some solid numbers at the position. 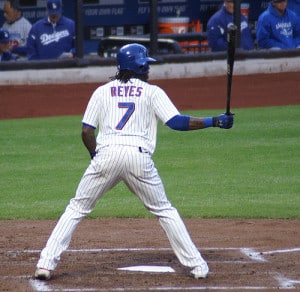 SS: Jose Reyes. Go ahead, just try to make a case for anyone else. No one compares to Reyes this year. I love Troy Tulowitzki, but he disappeared pretty much for the month of May. Reyes has 42 multihit games (out of 78 played) and, after the Mets played their 81st today, is on pace for 242 hits, 130 runs, 30 freaking triples and 60 stolen bases. Oh yeah, and he leads the Majors with a .353 batting average and is putting up a .397 OBP and .529 SLG, for a .926 OPS. He’s 12th in baseball in OPS. Not bad for a leadoff hitter and shortstop. In fact, the 11 above him are all outfielders, first basemen or David Ortiz. I may have more on Reyes in another post soon, but I think he’s now the one the Mets have to keep (and, sadly, maybe David Wright is the one who is allowed to go if both can’t be career Mets). And Fred Wilpon had it backwards: Carl Crawford wouldn’t get Jose Reyes money. 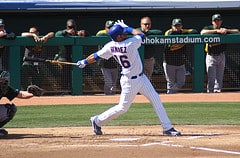 3B: Aramis Ramirez. With David Wright and Ryan Zimmerman hurt for much of the first half, this is the weakest position of them all. There’s no clear frontrunner (sorry, I just can’t get behind Placido Polanco as the best third baseman in the NL this year) and the stats are anemic. Wright is still tied for third among NL third baseman with his six home runs, one behind Chipper Jones and three behind Ramirez.

C: Brian McCann. You could have a great debate about the second-best catcher in the Senior Circuit.

OF: Ryan Braun, Matt Kemp and Voter’s Choice. The first two are as easy as McCann and Reyes. Kemp is 20-20 already, with 22 home runs and 22 stolen bases, and is batting .331. He’s currently second in the NL in batting average, first in home runs and third in RBIs — he’s got a legitimate shot at the Triple Crown (if Reyes’ batting average comes down a little). But the third guy? Take your pick from Carlos Beltran, Carlos Gonzalez, Chris Young, Andrew McCutchen, Lance Berkman, Justin Upton or Drew Stubbs. I can’t decide how to separate them.

So there they are: the 17 players I’d like to see take the field in Phoenix a week from Tuesday. We’ll find out who gets to go on Sunday. 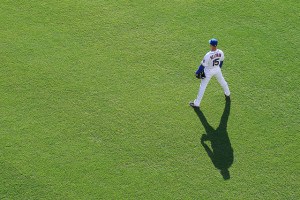 « American summer
Baseball on the Fourth »