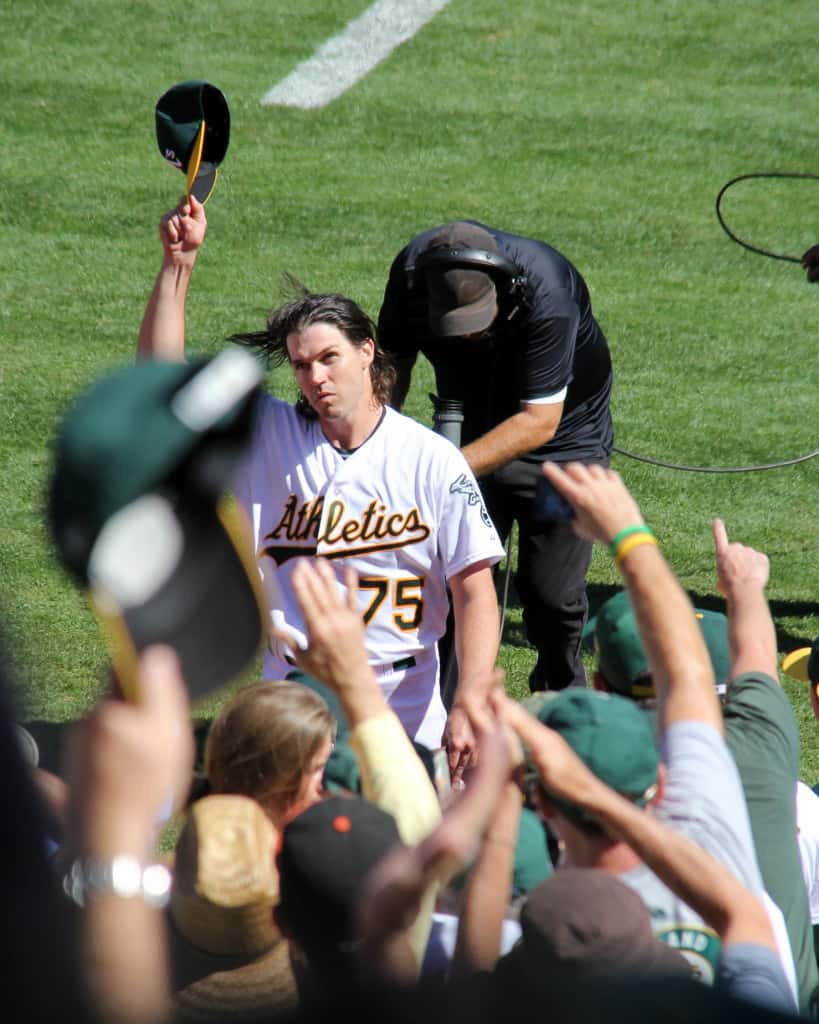 With their season a loss and their Bay neighbors the Giants in town — starting former A’s great Tim Hudson themselves — Oakland gave former AL Cy Young Award winner Barry Zito one more home start, and it happened to be the game we were attending. Along with Mark Mulder (who was in attendance; the three would throw out ceremonial first pitches the next day), Hudson and Zito formed “The Big Three” atop Oakland’s rotation from 2000-04. The A’s won three of those five division titles and another Wild Card, with the trio combining to post a record of 234-152.

Zito had the longest tenure in Oakland, because he was deemed by general manager Billy Beane to be the one worth keeping. Beane broke up the triumvirate in December 2004 with trades of Hudson (to Atlanta) and Mulder (to St. Louis) within two days of each other. Zito pitched two more years in Oakland, posting a career record of 102-63 with them and winning the 2002 AL Cy Young Award.

In December 2006, Zito too left Oakland, moving across the Bay to San Francisco for a seven-year, $126 million deal that was the largest deal given to a pitcher to that point. It’s considered among the worst deals in baseball history — over the course of the contract, Zito went 63-80, posting only one winning season (15-8 in 2012), though he did help the Giants to two of their three recent World Series championships.

After sitting out last season, Zito signed a minor league contract with the A’s this spring and spent the entire season in the minor leagues. He wasn’t among their initial September callups, but the A’s brought him back toward the end of the month and gave him this start and one other, four days later in Anaheim.

At this game, with the stands packed (except for the closed-off upper deck, something the A’s instituted several years ago to bring more of a cozy baseball atmosphere to a football stadium) with as many Giants fans as A’s fans, both pitchers were cheered heartily … and then turned in lousy outings. Hudson was pulled first, getting just four outs and allowing three runs (two earned) on one hit, three walks and two hit batters. Upon his exit in the second inning, he went and sat in the dugout, an on-field camera crew focused on him, and took in the cheers. Reluctant to acknowledge the ovation after such a terrible outing, I don’t think he did much more than a cursory cap tip on his way to the dugout. But after the half-inning was over, the P.A. announcer acknowledged Hudson, and he stepped out to wave to the fans, clap and bow.

Zito’s exit was similar, though after a slightly longer outing. The left-hander got six outs and faced one batter in the third inning before being pulled after yielding four runs on six hits and a walk. He gave a more demonstrative doff of his cap on his way to the dugout, then came out again during the next inning break when he too got the formal recognition from the P.A. announcer. Both tributes brought the 36,067 fans to their feet, and I imagine the only ones who remained seated were those who might not be able to stand, and anyone caught in the restroom at the time.

The Oakland Coliseum (which bears a corporate moniker that even the A’s don’t stress) isn’t much of a ballpark destination. I imagine the only bucket lists it is on are of those fans who are trying to hit all 30 Major League stadia. To be honest, I wasn’t even going to try to fit it into our itinerary, but Casey said, “We’re there — we have to go!” And though we fasted (burgers before the game, dinner with friends after) and only spent the $25 to park, we enjoyed most of the game from our shaded seats and spent another couple innings walking the concourse to get a feel for the place (and to see if they had ice cream served in helmet cups — which they did not). After three hours of baseball and eager to see our friends, we began the walk across the sea of cars to our rental, walking out with the A’s ahead 10-9. From the lot, we heard a roar, and later realized it was in reaction to a grand slam hit by Giants left fielder Jarrett Parker — his third home run of the day and the difference in a 14-10 Giants victory. How appropriate — a football score in a baseball game at a football stadium.

« Only Nolan
For once, not the last game »