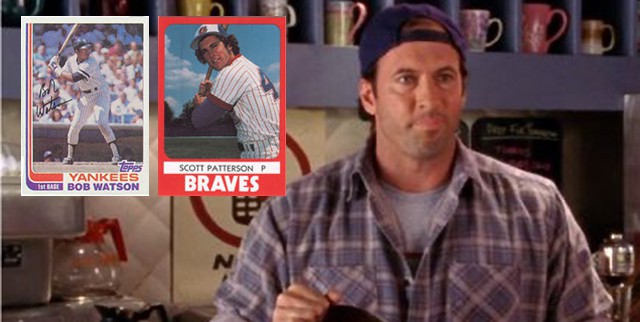 My wife is a big fan of “Gilmore Girls,” and when the show was on the air during its original run, it rivaled “The West Wing” for the fastest dialogue on television.

It also featured actor Scott Patterson, a former pitcher in the Braves and Yankees systems (plus a spring training with the Rangers and another with the Dodgers before his career ended). His baseball past is pretty well known (why else would his baseball cards be selling for so much?) but what I hadn’t realized is that he was actually a pretty decent prospect, rather than just someone with amateur talent who kicked around the minors for a few years before giving up his Major League dreams.

After graduating from New Jersey’s Haddonfield Memorial High School, Patterson played at Rutgers and a couple of community colleges before the Braves drafted him in 1980.

“This deal enables us to obtain a young, talented pitcher about whom we have had excellent reports,” Yankees VP of baseball operations Bill Bergesch said after making the deal. “Scott has advanced rapidly in the Braves’ organization and our people who have seen him feel he has a great deal of potential.” 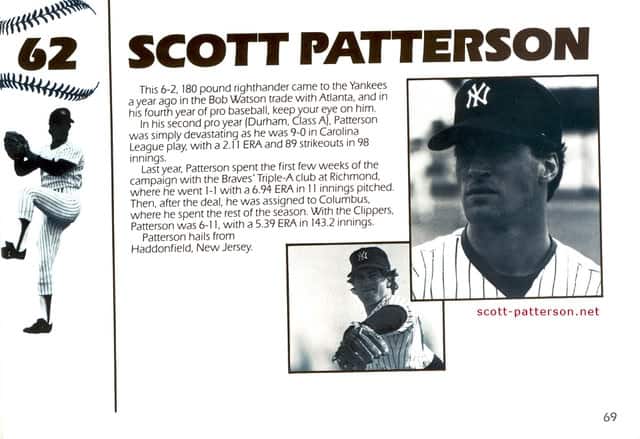 After the trade, Patterson spent the ’82 season with the Yankees’ Triple-A affiliate in Columbus, Ohio, but then split each of the next four seasons with Double- and Triple-A. His results varied and his ERA climbed, leading to the Rangers’ selecting him in the Rule 5 draft in December 1985 but selling him back to the Yankees before the season began. His final spring in baseball was with the Dodgers in 1987. He was 28, and when he didn’t make the team, he had a heart-to-heart with Hall of Famer Sandy Koufax.

“I was brokenhearted, and I told him my heart wasn’t in it anymore,” Patterson told People magazine in 2002. “He said, ‘Then this is where you should get out.'”

While playing Luke Danes on “Gilmore Girls,” Patterson never showed his athletic side (though he was known for wearing a backwards baseball cap while running his diner), but he has in other roles — as Mike McGrevey in “Little Big League” and as slugger Dan Manville in a 1997 episode of “Arli$$.”

He had a pretty good swing for a pitcher, too.

« Predicting the 2017 Hall of Fame class
The Christmas Babe »